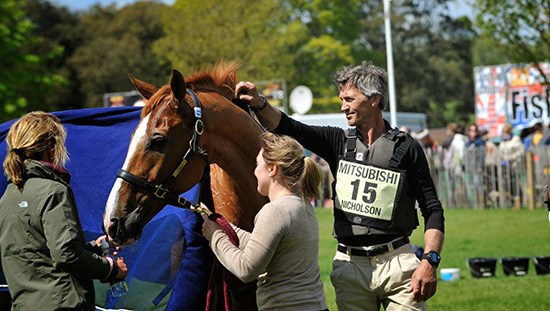 The New Zealand rider was entered with Libby Sellar’s Nereo, individual bronze and team medallist at the 2010 World Equestrian Games and third at Badminton in 2013.

However, Andrew is recovering from a serious neck injury sustained at the Festival of British Eventing at Gatcombe Park last August. Despite good results so far this season, included a win at advanced level on Jet Set IV, also owned by Libby Sellar, at Withington on Sunday, Andrew feels he is not quite ready for the test that running competitively at CCI4* level demands.

Andrew said: “I have reluctantly decided to withdraw Nereo from Badminton – through no fault of his own. I have doubts over my own fitness and ability to do him full justice at this point.

“I successfully rode four horses in the advanced at Withington on Sunday, all of whom won prizes, but was aware I felt fatigued by the end of the seven-minute cross-country course. It would therefore not be sensible to attempt an 11 1/2-minute course at Badminton.

“I have every confidence my strength and fitness will continue to improve and, with the full support of Nereo’s owner Libby Sellar, we now plan to target Nereo towards significant events such as those in the exciting new Event Rider Masters series.”

Nereo is a 16-year-old gelding bred in Spain by Ramon Beca. He won the French CCI4* at Pau in 2012, a couple of months after leading New Zealand to team bronze at the London Olympics, where he and Andrew finished fourth individually.