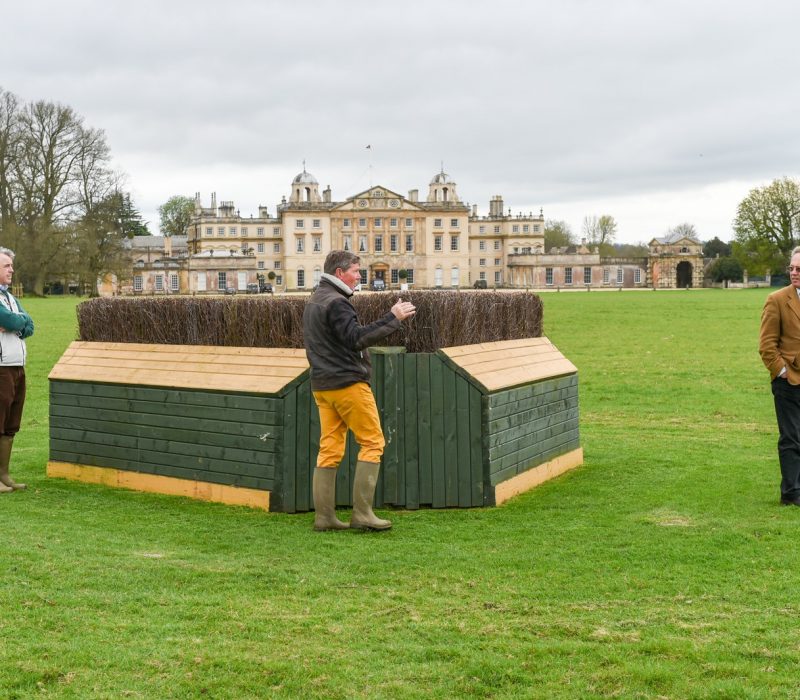 Eric Winter’s debut course for the 2017 Mitsubishi Motors Badminton Horse Trials has a distinct look to it. It greatly resembles the swashbuckling tracks of the 1970’s, but with the advantage of 21st century safety technology.

Unlike many modern courses there is a deliberate lack of superfluous decoration with most fences using massive rustic timber.

Starting as ever in the main arena over the ASX STARTER, this year riders head in a clockwise direction over an inviting roll top brush the ROLEX ROLLTOP. There is a new look to the Keepers ditch with a large but inviting table KEEPERS QUESTION and another single fence MIKE WEAVERS HAYWAIN. The first real question comes with the four part SAVILLS STAIRCASE, rails, two steps down and an angled brush away. A gallop towards the House then introduces a very substantial table COUNTRYSIDE BIRCH, where the brave can angle it and save several seconds cutting inside a tree on landing.

Eric has put THE LAKE complex earlier than recently as he felt he could then make it a bit more of a challenge. First come the L200 PICKUP TRUCKS, then a massive drop into the water, a right turn to a wooden cottage out and a brushed up log. (There are time consuming alternatives here).

Instead of pockets of relentless action there is a flow to the course which next takes in an uncompromising white parallel in front of the House, the OFFSET OXER then ahead to the SHOGUN HOLLOW, two wide corners with a dip between.

A longish gallop follows down to the Vicarage Ditch where Eric has reintroduced an eighties classic, the KBIS BRIDGE. It is then left to the OUTLANDER BANK with an even choice of cottages on the top and right to another seventies tribute act, a spectacular revamp of a thick rail over the ditch the ROLEX GRAND SLAM TRAKEHNER.

It is up one of the few inclines in Badminton Park to the HILDON WATER POND with a single tree trunk in, another in the water and a sharply angled log away. Here again there is a very long ‘scenic route’. Down the hill again to the let up SHEEP FEEDER and another place to make up a bit of time in the approach to the familiar MIRAGE POND, two angled hedges with the pond between on quite a tight distance. Another relatively simple, but maximum size rustic spread, the DEVOUCOUX OXER follows before coming back into the Deer Park through the PHEV CORRAL, up the mound to a very upright set of post and rails then down into the ranch’s ‘yard’ where riders can choose either the left or right side of the post and rail funnel on a tight angle.

Back to the front of the House to the EVENT MOBILITY DINING TABLE (named for the event’s Charity of the Year) followed closely by the JOULES CORNERS, a hedge to set riders up for a double of angled boxed brush corners. Horses then get their feet wet for the last time, splashing through to an old type vast, ‘Burghley’ bullfinch, the WADWORTH LAKESIDE.

Most of the serious questions have been asked by now and the two log piles in the IRISH HORSE GATEWAY HUNTSMANS CLOSE are much kinder than in recent years but to ensure riders don’t just go flat out alongside the road Eric makes them go back and forward across the fence line over two upright WORLD HORSE WELFARE GATES. The HORSEQUEST QUARRY,  starts with a big brush on the flat, down into the dip and over a choice of broom head ‘skinnies’ and up a steep slope to an upright wall.

The last few relatively ‘kind’ obstacles start with the double of FEI CLASSICS HEDGES, then the ROLEX TRUNK whose approach is through a spinney and back into the arena and we finally come to the MITSUBISHI FINAL MOUNT, for which on Eric’s instigation the design was put out to public competition. Of 13,000 votes on line nearly 4,000 went for Tots Hanson’s carved saddles.

If there was one word to describe the 2017 course it could be ‘chunky’.