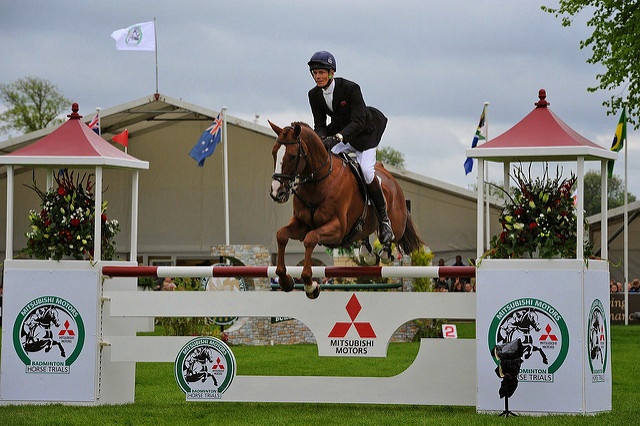 “We are all hugely looking forward to the start of the equestrian events in Rio and especially Eventing on 6th August and wish the best of luck to everyone – we look forward to welcoming many back to Badminton in 2017.” Hugh Thomas, Event Director

An Olympic year is always an extra busy one for us at Badminton with the interest in the event itself being extraordinarily high with spectators and press bustling to guess at who will be selected for their respective Olympic teams. Badminton was started in 1949 to prepare a British team for the next Olympic Games and our role as a pointer to Olympic success for riders from many countries has continued ever since.

Event Director Hugh Thomas also has a special personal interest in the Games, having competed on the British team in 1976 (Montreal), been a Selector for 1984 Los Angeles), the course designer in 1988 (Seoul), cross country controller in 1992 (Barcelona), Technical Delegate in 1996 (Atlanta), on the Appeal Committee in 2004 (Athens) and President of the British Equestrian Federation when London won the bid for 2012 and Greenwich was chosen as the equestrian site.

This year’s Games in Rio are particularly exciting for Badminton followers with the past three of our winning combinations heading there and vying for a place on the final podium.

The list of athletes competing at Rio overall lists many other household names and former Badminton winners such as New Zealand’s Mark Todd who has won Badminton on four occasions, and Pippa Funnell for GB who has won three titles. France’s Nicholas Touzaint and Jock Paget from New Zealand each hold a Badminton title too.

Hugh Thomas, Event Director commented: “We are all hugely looking forward to the start of the equestrian events in Rio and especially Eventing on 6th August and wish the best of luck to everyone – we look forward to welcoming many back to Badminton in 2017.”

Equestrian Needs You
The IOC will be monitoring the popularity of all sports throughout the Games, so your input during this time is vital to help raise the profile of the sport. So as and when you are watching equestrian sports at this year’s Olympics make sure you share the excitement with your friends on social media and use the hashtags #TwoHearts and #Equestrian.

Follow the action at Rio2016
Keep up with Equestrian at this year’s Olympics via the below links:

How to watch Eventing in the UK

Find out about all Equestrianism at the Olympics