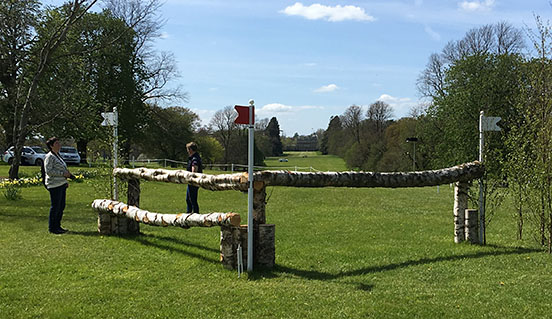 From a few strides out it looks fine, but it is a massive open corner...

Daisy (née Dick), who represented Great Britain at the 2005 and 2007 European Championships, the 2006 World Equestrian Games and the 2008 Beijing Olympic Games, posted a best Badminton finish in 2010 when Spring Along finished in third place. She shared her thoughts ahead of today’s Cross Country phase.

Fence 1: The ASX Starter
You have to come out of the start box with a really positive attitude and get a nice, confidence-giving, jump over the first. There aren’t many ‘friendly’ fences out there so you have to make the most of them.

Fences 2 & 3: Park Piece Hedges
These are definitely as big as you’d expect at a 4*, but they are straightforward and riders will be looking for two more good jumps. Those looking to get close to the optimum time will be taking quite a tight line between the two.

Fences 4 & 5: HorseQuest Quarry
Mike Weaver’s Haycart is a familiar sight at Badminton, but placed off a downward slope in the bottom of the quarry it comes up big and upright, and needs respect. Landing from that you need to move on out of the quarry. This is an area that breaks a rider’s rhythm, turning back through the quarry walls. I’d do a ‘show jump’ canter to the first wall but then ride forward for the wall out. You can’t dictate your take off point because of the steep incline, so you just have to make sure your horse has enough impetus to jump it.

Fence 6: Oxer Chicane
A nice big fence off a turn – the turn actually helps set up for the jump.

Fence 7: Irish Horse Gateway Huntsmans Close
This is very big, and the long, alternative route isn’t particularly attractive. You have to be commited here, and with the ‘points’ of the brush corners cut off you don’t have a big area to aim for.

Fence 8: Wadworth Lower Lake
Some horses give this a lot of space and jump surprisingly big over it – I’d aim to jump the hanging log close to the red flag on the right.

Fence 9: Jack Wills Garden
Riders have two options here and it will be down to personal choice. One isn’t faster than the other. I think the key is to not rush through the two oxers, but to treat it like a show jumping exercise.

Fences 10, 11, 12: Swindon Designer Outlet Mound
The log in is straightforward, but the dip in the ground before the second log could unbalance horses. Then there is a steep bank up to the third log where you need plenty of impulsion to land well before the three stride turn to the acutely angled final element. I think we will see plenty of changes of plan through this combination.

Fence 13: FEI Classics Stick Pile
A fence to put a smile back on the riders faces!

Fences 14 & 15: Mirage Pond
These are decent enough, with a big drop over the first. If a horse pecks on landing riders could tip forward, making the jump out much harder.

Fence 16: PHEV Oxer
This is massive – but a relative let-up fence.

Fences 17, 18 & 19: Gatehouse New Pond
Jumping the first set of birch rails in the middle gives the best landing ground, but you then need to turn in the water to the angled oxer in the middle of the pond. Jumping in on the right gives you a straighter line. You need a good canter in the water – an open oxer in a pond is unusual! Coming out the the final element your horse has to be focussed and have plenty of energy. From a few strides out it looks fine, but it is a massive open corner – hopefully by the time they are up close, horses will have decided to jump it (pictured).

Fence 20: Rolex Grand Slam Hedge
A good shot at this will restore some confidence if needed.

Fence 21: KBIS Vicarage Vee
Similar to how it used to be in the ‘old’ days. Landing over fence 20 riders will be giving their horses a kick and making sure that they have their full attention because there is a very small area to jump over at the Vee. It’s a case of get your line, keep the horse’s head up and go for it – you don’t want him looking down into the ditch.

Fence 22: Outlander Bank
I’m glad that there is now a stride to the roll top rather than a bounce – it is a massive step to jump up, and a bit of extra space on top of the bank makes it kinder.

Fence 23: Shogun Hollow
This has been a big talking point among the riders. There are some very acute angles and the joy of a dip between the elements. Some riders might also be unravelling a bit by now and this is a place where it is easy to make a mistake. Riders will need to ride according to the feel they get from their horses and I expect several will take the long alternative route rather than risk 20 penalties – or worse.

Fence 24: World Horse Welfare Gates
Horrible at this stage of the course – but they will serve their purpose and slow riders down.

Fence 25: Silver Anniversary L200s
A classic Badminton fence that you need to keep motoring towards, and make sure your horse doesn’t lose focus due to the crowds.

Fence 26: The Lake
Again, keep moving on round the turn and ride positively. The brush drop is forgiving and relatively soft. It’s not the hardest lake combination that I have seen.

Fence 27 & 28: Alexanders Silver Birch
This caused a few problems last year, and I think the key is to get your line right and be positive. Some people made it look easy, others came a cropper.

Fence 29: Countryside Tree
Not to be underestimated at this stage of the course. There was a faller here last year.

Fence 30: Savills Escalator
This needs respect because some horses might be a bit strung out by now. The bending line to the second and third elements should stop any ‘flyers’ over the first. Riders need to sit up and stay balanced.

Fence 32: Rolex Crossing
Make sure your horse is listening and get your line right. It wouldn’t be the first time that someone slips up so close to home.

Fence 33: Mitsubishi Finale
The best view in the world! Sit up, balance, make your turn – don’t go for a flyer. Gallop through the finish and then it’s time for lots and lots of big Pony Club pats for your horse.