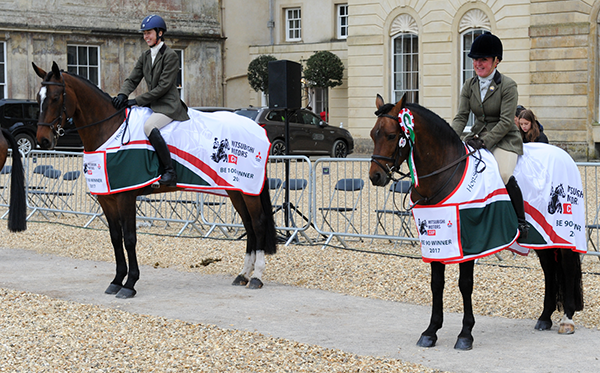 “We really have had two days of phenomenal competition and it has been a real pleasure to watch competitors in the Mitsubishi Motors Cup relish the opportunity of competing at Badminton."

History repeated itself in the BE100 today as the 2016 winner once again rose victorious in the BE100 class as the trophy this year returns to Katie Hancock with a new ride Coddstown Pet. It was third time lucky for BE90 winner Laura Avery who beat off tough competition on Willoway Free Spirit in the BE90.

Katie Hancock piloted her seven year old mare Coddstown Pet to a winning score of 29.8 penalties to excitedly lift the Mitsubishi Motors Cup against the backdrop of Badminton House for the second year in a row. The 34 year old Safety and Compliance Officer, from just outside Newquay in Cornwall, started her campaign on Tuesday by finishing on their dressage score of 29.8 to sit in eighth place after the first day of competition.

An influential show jumping phase followed but proved no problem for Hancock and her shire x thoroughbred, affectionately known as ‘Gabby’, despite over fifty per cent of the field picking up penalties here.

Described by many riders as clever and technical, James Willis’ beautiful cross country course saw 36 of the 75 starters come home without issues over the fences including Hancock, who claimed the title in 2016 on the full Irish Draft Kilcandra Rambo Ray, stopping the clock clear with seven seconds to spare.

Hancock commented on whether coming back made the win easier; “Definitely not! I came back with a really baby horse, I was amazed we got qualified so we thought, we’ll go back to Badminton and have some fun in the amazing atmosphere. I wanted to take the pressure off and give her a really good experience. I am in awe of her honesty and bravery, to me she is going to be a real horse of the future.

“It means everything, I’ve got so many friends whose main goal is to come and compete here – it’s absolutely incredible. Winning last year was great but completely different as I was riding an experienced horse and was hoping for a good result.  This year’s result on an inexperienced mare is just amazing, I am so proud of her!”

It was to also be the same position two years in a row for the BE100 runner up, as Stephanie Waite and Stay In Touch claimed second place as they did in 2016.  The Warwickshire based livery yard owner and her 14 year old gelding ‘Danny’ put on a fantastic performance to finish on their dressage score of 30.8 penalties, within touching distance of the illusive first place.

“We’ve done everything with him, Pony Club teams, Pony Club camp, team chasing everything! I’m nervous, I don’t handle pressure very well but I knew he could do it and I kicked on and went for the time because I got time faults last year. I couldn’t have been beaten by a nicer person – to win two years on the trot on two different horses is pretty special and my little dude did everything he could,” praised Waite.

Fourteen year old Sophie Byford, from Essex, showed how it was done on the pint sized The Texas Ranger (owned by her mother Karen Fiske) taking third place in the very competitive BE100. Byford and the 14.1hh gelding, known at home as Tonto, completed their two days of competition with a score of 30.8 penalties after adding nothing to their dressage score from the show jumping or cross country phases. “I just really wanted a double clear! Cross country is his strongest phase, and I was really pleased with my dressage score too.”

The BE90 went down to the wire as spectators had to wait for one of the final riders of the day to see who would be crowned the 2017 winner – and it was Gloucestershire’s Laura Avery who claimed the hotly contested title on her New Forrest stallion Willoway Free Spirit.

This was Avery’s third visit to the Mitsubishi Motors Cup, having competed in 2014 and 2015 and qualified for the 2016 event but sat it out as she was seven months pregnant with her first child, and it turned out to be the charm. Remarkably this was only ‘Spirit’s’ tenth British Eventing competition – he is more familiar with the Working Hunter show ring – which clearly helped to set the duo up for their incredible dressage score of 26.1 penalties. With no one near their score and a clear in the show jumping it was just the BE90 cross country track that stood between Avery and the win. A clear round inside the time sealed their victory; “He was insane across country, he felt like he could jump anything, brave as a lion.

“I might have a go [at BE100] based on today’s performance – he found it easy! You come with hope rather than expectations; he’s jumped double clear every time out bar one so he felt really good. I really wanted a double clear and he gave me that and a lot more.”

Second place and winner of the Keep Kicking On trophy (best placed rider over 40 years of age) was taken by the most local rider in the field, Anna Wiles, having travelled from the neighbouring village of Sherston. Wiles added nothing to her dressage score of 30.9 penalties to take the runner up place on her own 11 year old gelding King Of The Glen, with this year being a return to the popular event having competed in the BE90 in 2014. “The first time I was just so excited and nervous to be here.

“My prep wasn’t great this time, I must admit, but I thought I just had to kick on and go – hence why I must have got the Keep Kicking On! I was nearly in tears going down the centre line thinking ‘I’m here’ – I just thought lets go for it,” commented Wiles.

Mitsubishi Motors Cup debutant Emily Atkins couldn’t have asked for a much better start finishing in third place on Nicola Atkin’s Classiebawn Trooper. “This is my second year eventing before I did two years of dressage; I’d never really taken my feet off the ground! It was such a big experience for me.”

The 15 year old student from Kent got her competition underway with a dressage score of 28.4 penalties and added just 2.8 time penalties from the cross country phase to complete on 31.2.

Lance Bradley, Managing Director of Mitsubishi Motors in the UK, commented; “We really have had two days of phenomenal competition and it has been a real pleasure to watch competitors in the Mitsubishi Motors Cup relish the opportunity of competing at Badminton.  No doubt they will remember this for years to come and we are thrilled to have been a part of it.”