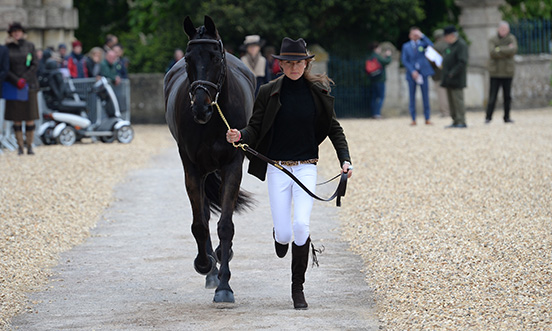 As usual there was one wardrobe malfunction; Emily Gilruth lost one shoe as she trotted up the runway and the other shoe on her return...

All 80 horses passed the first horse inspection at this year’s Mitsubishi Motors Badminton Horse Trials and go through to the dressage phase.

Despite overcast skies the fashion show was as colourful as ever – some of the men more so than many of the women. Andrew Hoy’s bright green tie and matching suede boots certainly stood out, as did the flash of pink lining inside Oliver Townend’s navy suit.

Standing out among the men were Alex Bragg in a blue tweed jacket and waistcoat, red tie and pale trousers, and Badminton first timer, Italy’s Pietro Sandei in military uniform. Looking particularly stylish amongst the women was fellow first timer Willa Newton who sported a dark blue velvet double breasted jacket, dark blue trousers and boots, while Canada’s Kathryn Robinson (pictured) was as glamorous as she was last year in a brown jacket, hat and boots with white trousers.

Several horses were bursting out of their skins. Andrew Nicholson had his hands full with Qwanza, as did the almost 5 foot 2 Ros Canter with Caroline Moore’s 17.2hh Allstar B. Two were sent to the hold box, Astier Nicolas’s Rio silver medal winner Piaf de B’Neville and Laura Collett’s Grand Manoeuvre. Both passed on re-inspection.

As usual there was one wardrobe malfunction; Emily Gilruth lost one shoe as she trotted up the ‘runway’ and the other shoe on her return.

Tomorrow’s dressage starts at 9.10am with the ‘Guinea Pig’ test, which will be performed by Will Furlong and Collien P 2. The first competitor into the arena will be Lauren Kieffer for the USA, riding Landmark’s Monte Carlo, at 9.30am.