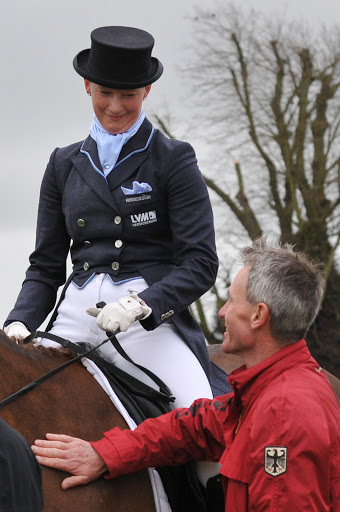 Yesterday was a good day for Badminton first-timers, with four – Michael Jung, Sandra Auffarth, Jonathan Paget and Tiana Coudray – sitting in the top 10 after dressage.

Germany’s Sandra Auffarth and Opgun Louvo sit on a score of 41.3 overnight.

“My horse was great,” said Sandra, who won team gold and individual bronze at the London Olympic Games last summer. “At the beginning of the test he was a little nervous of the wind and rain. He made a couple of mistakes in the halt and a flying change, but other than that he felt good and concentrated.”

Sandra has walked the course with her trainer Chris Bartle as well as other German riders.

“I am excited,” she added. “My horse is very fit and he usually gives me a great feeling cross-country. There is not one fence that I am worried about, but altogether it’s a difficult test.”

“It’s a big relief to get here,” confessed Louisa, who completed Burghley in both 2011 and 2012 and was entered for Badminton before it was cancelled last year. “The atmosphere is much more relaxed and less daunting than I expected.”

Of today’s cross-country test she said: “The course looks good, but there are a lot of jumping efforts in the last couple of minutes, so I will have to be mindful of that.”

Jamie Atkinson is another British rider on his first trip to Badminton.

“I am so glad to be here,” said Jamie, who finished third with Celtic Fortune at Blair Castle last year. “I was a little disappointed with my dressage – it started well, but Celtic Fortune got a little upset when he struck off on the wrong canter lead.”

This is the horse’s first four-star.

“I am looking forward to it, but will have to watch the owl hole as he’s not too keen on them,” he added.

Clark Montgomery was also slightly disappointed with his dressage.

“He got a bit lit up going into the arena with the clapping and the previous horse coming out,” said Clark, whose Universe was ridden by Clark’s wife up to novice level before she handed him the reins. “I just couldn’t quite get him back on side.”

However, he is looking forward to today.

“It looks like it is the sort of course that if you ride well, you will have a good ride round,” added Clark, who is currently based with Christian Landolt but is originally from Texas. “I’ve had a good build up with great runs at Burnham Market and Belton.”

And finally… dressage leader Michael Jung, who is also a first-timer, dispelled the rumour that he doesn’t get nervous.

“I feel more relaxed now, but I think everyone gets a little bit nervous before the cross-country at an event like this.”