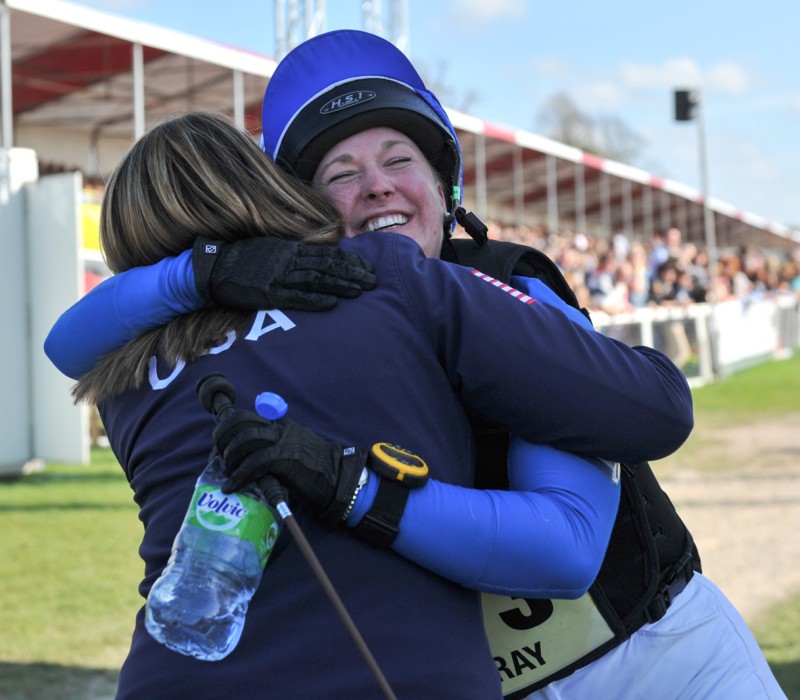 This year’s Badminton field included 20 first-timers – five of whom currently lie in the top 10.

Aside from the overnight leader Michael Jung and runner-up Jonathan Paget, Germany’s Sandra Auffarth and America’s Tiana Coudray both had dream debut rides, finishing the day in fifth and 10th places respectively.

Sandra added just 1.2 time penalties to her dressage score of 41.3.

“I had a great ride.  It was my first time here, so I didn’t know how he would cope with the distance and the terrain of the cross-country. I didn’t want to push him too hard which is why I got a few time penalties,” she said.

Tiana was sporting an ear-to-ear grin after her foot-perfect ride on Ringwood Magister, which left her with two time penalties to add to her dressage score of 43.3.

“He’s a fantastic horse and he tried his heart out out there,” she said afterwards.  “He got better and better the further round the course we went. I didn’t feel like we were completely on-song in the warm-up – which is a bit of a worry at Badminton – but we soon got in the groove.”

Tiana’s only anxious moment came when a bandage on Ringwood Magister’s leg unravelled itself before the Lake.

“I noticed it as I was approaching the Mitsubishi Pick-Ups, but luckily it broke off and didn’t get in the way.”

Tina said of tomorrow’s showjumping: “I don’t want to jinx us, but he’s normally a very good jumper on the final day. I wouldn’t want to be sitting on anything else.”

Of the other first-timers, France’s Astier Nicolas and Piaf De B’Neville’s clean sheet elevated them into the top 20 – they currently lie 17th – while Tom McEwen and Dry Old Party achieved the same feat to rise from equal 32nd after dressage to 19th.