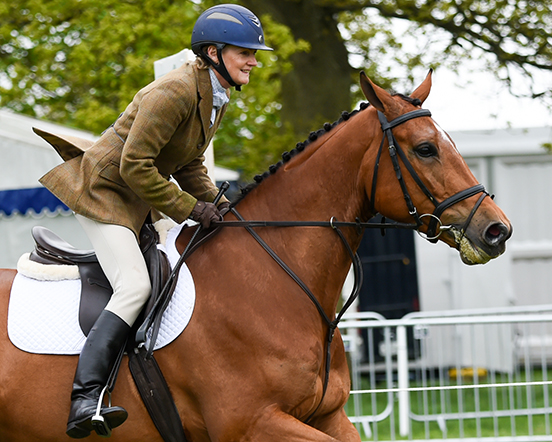 “Strange to think that I last show jumped here eight and a half thousand days ago – and I'm wearing the same pair of johdpurs!”

Lady Lloyd-Webber was back in action at Mitsubishi Motors Badminton Horse Trials today, for the first time since 1989. However, this year she was contesting the Dubarry Burghley Young Event Horse 4-year-old qualifier rather than taking on the Four Star competition.

Madeleine has horses in her blood. In her teens she progressed up through Young Riders, winning team and individual silver medals at the 1984 Young Rider European Championships. She made her senior British squad debut in 1985 at the Burghley Europeans, and won team gold at the Bialy Bor World Championships the following year. Her selection came, in part, off the back of two strong Badminton performances; Madeleine placed 15th and 11th riding The Done Thing, a horse she produced herself and after whom she named her country clothing company.

After marrying Andrew, Madeleine took time away from competing to have a family; she has three children. However, horses were still very much a part of daily life. In 1992 Andrew and Madeleine founded Watership Down Stud in Berkshire, with the aid of racing manager Simon Marsh. Four years later they purchased Kiltinan Castle Stud in Co Tipperary.

“Both studs are run very much as commercial enterprises,” Madeleine explained. “We tend to sell the colts and keep the fillies. We’ve had some great results with homebred fillies, most notably Dar Re Mi who won four Group 1 races and The Fugue, who was named Champion three-year-old filly and won three Group 1s, including the Prince of Wales Stakes at Royal Ascot.

“My love of eventing has never left me, so I was delighted when Bella (Madeleine’s daughter) started. It’s been a great opportunity to reconnect with old friends from my competition days – although I have to say, it’s far harder watching than riding.”

But back to Mitsubishi Motors Badminton 2017, and the Dubarry Burghley Young Event Horse class. Madeleine was riding Unfinished Business, a horse she bought from Ireland as a yearling. The pair finished sixth. “He’s got a fabulous temperament and is probably the nicest horse I’ve ever ridden on the flat. He was bred for show jumping really; he’s by Peppermill and has Big Star as an uncle so not surprisingly he’s bold as brass.

“I backed him myself and have produced him so far, but the odds are I will send him to a ‘proper rider’ as he progresses. Today taught me that it’s very easy to be critical from the sidelines [when watching Bella], it’s not so easy when it’s you in the saddle.

“Strange to think that I last show jumped here eight and a half thousand days ago – and I’m wearing the same pair of johdpurs!”