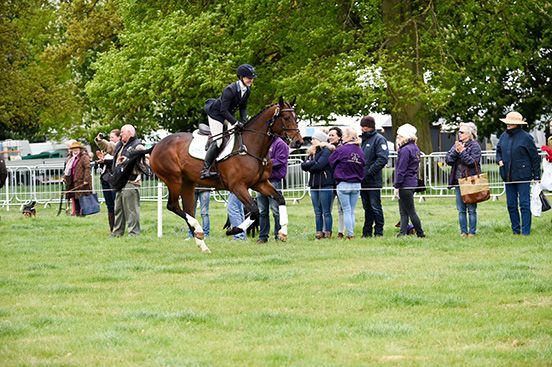 “You find out what you have when you take them out, and we’re very happy with what we have..."

UK based American event rider Tiana Coudray steered not one, but two young horses to victory, taking both the four and five-year-old Dubarry Young Horse Qualifiers at The Mitsubishi Motors Badminton Horse Trials.

“We bought her out of the Brightwell sales in December as a three-year-old, and she’s very mature for her age,” said Tiana who is well known for producing talented young horses. “This was her first ever outing, and it was like she’s been here before.”

“You find out what you have when you take them out, and we’re very happy with what we have,” added Tiana. “They’re both so level headed which is why I think they’ve done so well here today because there is so much for them to take in. It really stands them both in good stead.”

‘Baloo’ was foaled at his owner Nicola Burton’s Wrestow Stud.

“I ended up buying him as he grew too big for his previous owner, and he will hopefully become my 15-year-old son’s eventer,” explained Nicola.

“I love working with the young horses and this series is great for giving them experience,” said Tiana. “They are interesting classes because it’s very subjectively judged, so if you have a nice horse and it hasn’t scored well, don’t get disheartened – you can win a class under one judge, and not make the top ten with another. For example, Cavalier Crystal only just qualified and then went onto win the whole thing.”

The five-year-old runner up spot went to Nick Gauntlett’s Party Trick by the legendary Chilli Morning, and third place was awarded to Gilly Kinloch’s Monbeg Odyssey ridden by Georgie Strang.