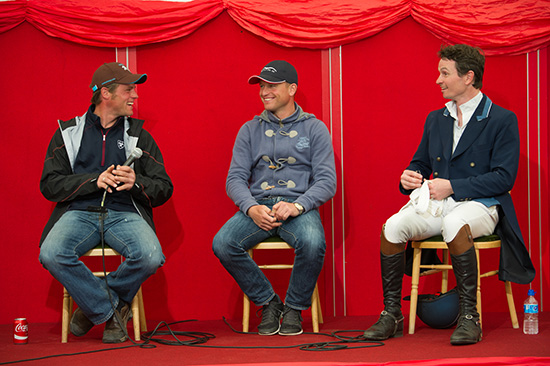 Germany leads the way after the first day of dressage at the Mitsubishi Motors Badminton Horse Trials. Michael Jung, bidding to be only the second ever winner of the Rolex Grand Slam, began his campaign in convincing style with a score of 34.4 aboard La Biosthetique-Sam FBW. This leaves him nearly four penalties ahead of his nearest rival, fellow German Andreas Ostholt (So Is Et).

“Sam has been quite nervous for the last two days because I haven’t been able to do any fast work or gallop him like I usually do because the ground has been too deep,” explained Michael. “I like to keep to the same routine at big events and Sam sensed something was different here, so I had to find another way to prepare him. I was therefore very happy with my test today.”

Andreas Ostholt, who finished ninth at last year’s World Equestrian Games (WEG) in Caen with So Is Et, delivered a polished performance to land a score of 38.2 – the only other mark in the 30s.

“I enjoy dressage on this horse. He’s nice to ride and tries hard,” said Andreas, who missed out on last year’s European Championships when So Is Et was “not quite right”.

Francis Whittington completes the top three at this stage and is currently best of the Brits aboard Margaret Smith’s Hasty Imp. Their score of 40 is a personal best at this level and left Francis both thrilled and surprised.

“I wasn’t expecting that; I’m over the moon,” he said, adding cautiously: “I’ve been in this position here before and it hasn’t always worked out [Francis fell from Easy Target when handily placed after dressage in 2010], so I’m going to go out on Saturday, ride the best I can and see what happens.”

First combination into the dressage tomorrow morning at 9.30am will be Ben Hobday and Mulrys Error.

Click here to find out why Ben will be carrying an extra passenger around the cross-country course on Saturday.

Find out what other riders thought of their dressage tests.