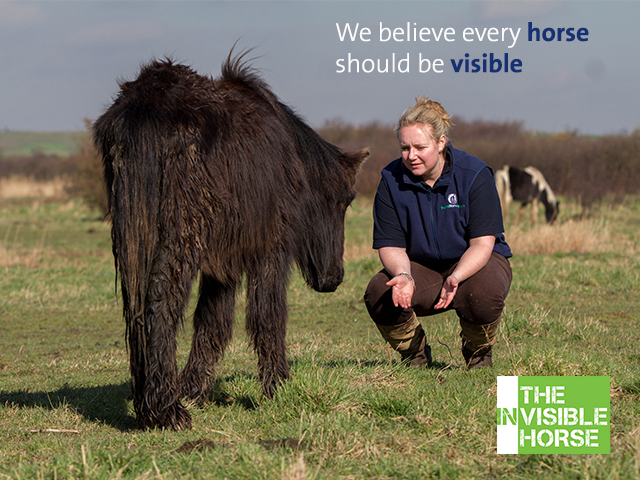 World Horse Welfare is delighted to announce that the charity raised more than £25,000 in its role as Charity of the Year at the 2016 Mitsubishi Motors Badminton Horse Trials.

The event has been described as an overwhelming success with thousands of visitors to the charity’s trade stand and cross country marquee over the five days of the event, a brilliant reaction to World Horse Welfare’s two main ring displays and countless children and adults alike enjoying the Invisible Horse Trail sculptures which were located around the trade stands and cross country course.

World Horse Welfare Chief Executive, Roly Owers, said: “We are delighted to have been Badminton’s 2016 Charity of the Year and the event was a fantastic success in both raising funds and awareness of World Horse Welfare, as well giving us the opportunity to engage with thousands of supporters.

“Our Invisible Horse Trail created such a buzz throughout the five days and we are so grateful to all of the artists and sponsors who helped make this possible through their hard work and commitment.
Rehoming was a key focus of the event, with our ‘Rehoming Café’ drawing huge interest from those looking for a new horse or pony and our main ring displays showing the amazing talents our horses and ponies have to offer.

“We also had extraordinary support from so many of the riders competing at Badminton. The Cross Country Preview Evening organised by the Horse Trials Support Group and supported by Dodson & Horrell in aid of our charity, provided a fascinating insight to the course from Zara Tindall, Yogi Breisner, Harry Meade and Ian Stark, whilst Alex Hua Tian, Vittoria Panizzon, Mary and Emily King and many more all took part in helping to paint our ‘People’s Horse’ sculpture on the trade stand and this will be auctioned later in the year along with the other 14 horse sculptures.

“There are so many people to thank for supporting World Horse Welfare in making the most of this outstanding opportunity including Hugh Thomas, Jane Tuckwell and the whole team at Badminton who have been so helpful throughout. We had a wonderful band of 250 volunteers who took part in a whole host of tasks from manning the Invisible Horse Trail sculptures to speaking to members of the public about our work and bucket collecting. Their enthusiasm and hard work was truly inspiring and I would like to express our sincere thanks to each and every one of them.”

See how the charity engaged with the thousands of visitors to this Badminton 2016 in the World Horse Welfare round-up video below:

World Horse Welfare (Registered charity no: 206658 and SC038384), is an International horse charity that improves the lives of horses in the UK and worldwide through education, campaigning and hands-on care of horses.  Since they were founded in 1927, their whole approach has been practical, based on scientific evidence and our extensive experience, and focused on delivering lasting change across the full spectrum of the horse world.