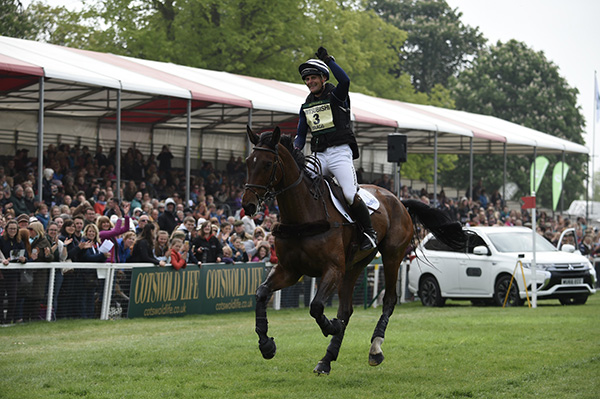 Clear rounds are proving as rare as hens teeth; the leaderboard will look very different by the end of today....

There’s been drama aplenty this morning, with some making the fences look relatively straight forward and some unravelling.

Pathfinders Lauren Kieffer (USA) and Landmark’s Monte Carlo retired after two stops, first at the final element of the Hildon Water Pond (17c) and then at the PHEV Corral (19a).

Rider nerves will have settled a little with a clear round from Mark Todd (NZL) and Leonidas II, although Mark did not have the smoothest of rides – most notably at the Lake (8) where Mark needed some quick thinking to change his route through the combination.

“It was hard work out there, it didn’t ride like it walked,” said Mark. “My advice for those still to come? Put your brave pants on and kick.”

The most stylish performance from the early riders was that of Badminton first timer Alex Bragg (GBR) who banked the second clear round riding Zagreb. The pair added 12.4 time penalties to its dressage score and currently lead the field by a small margin over Todd.

“Having been very nervous this morning, it was hard work trying to keep my composure out there, and I was a bit tentative at a couple of the combinations, but Zagreb really helped me out. It helps that I’ve had him since he was a baby and we really trust each other.” admitted a very, very happy Alex.

Also looking stylish, bar a runout at the Mirage Pond (17b), were Tina Cook and Calvino II, Tina saying: “I am so proud of him I could cry. I was proper worried this morning. Every time I’ve moved him up a level I’ve never been sure but he tried his socks off today.”

Andrew Nicholson posted another Badminton clear on the first of his two rides, Qwanza – not foot perfect, but clear. Using up even more luck was Astier Nicolas (FRA) and Piaf de B’Neville, Astier quick to credit his horse: “He was very genuine and generous – those combinations and the distance really took it out of him and he became very tired. He gave me all he had.”

Louise Harwood and Whitson walked back to the stables from the Wadworth Lakeside bullfinch (22), Cedric Lyard retired Cadeau du Roi after a runout at the Savills Staircase (5d), Hannah-Sue Burnett retired at the Lake (8), and Andew Hoy parted company from The Blue Frontier at the Joules Corners (21b).

Clear rounds are proving as rare as hens teeth; the leaderboard will look very different by the end of today.