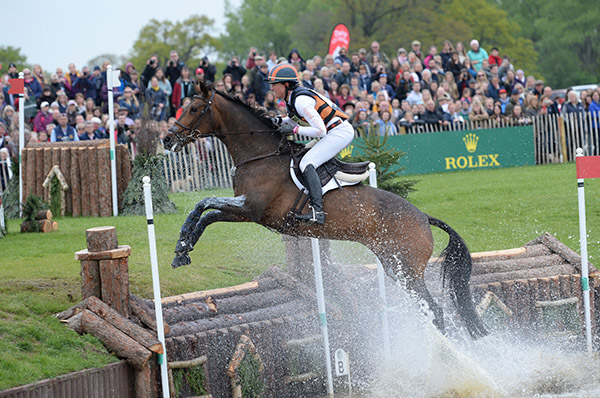 At my age, I’m not naïve enough to think that it’s going to be this good every time, so I’m going to enjoy the moment...

Lauren Kieffer (USA) & Veronica: Lauren opted for a steady cross country clear on her second ride, Veronica, who had been in 5th place after dressage on 38.0. Almost 30 time penalties dropped the pair to overnight 17th, but it was a better result than with first ride – and this year’s pathfinder – Landmark’s Monte Carlo who faulted at both the Mirage Pond (17) and the PHEV Corral (19) before Lauren raised her hand and withdrew. Lauren & Veronica finished 17th.

“Although I’m disappointed with the rail, Veronica jumped pretty well. I’m very fortunate – the mare has got me to my first Badminton and taken me all over the world. I’m just trying not to be too disappointed because after all, we’ve just completed our first Badminton. It’s been quite the experience and what I expected – big, bad and hard. It’s nice to have it under my belt and I’ll definitely be back again,” Lauren said after her round.

Lydia Hannon (GBR) & My Royal Touch: Lydia performed a very creditable dressage to score 45.1 for 22nd place. She followed that with a clear but steady cross country round, her 29.2 time penalties moving her up one place to 21st ahead of show jumping, in which she jumped clear for a finishing 19th place.

After cross country Lydia said: “My god she gave me everything and I know that with more experience I can make that time. She is just an amazing mare and I’m so grateful to her for everything.”

Imogen Murray (GBR) & Ivar Gooden: after a possibly disappointing dressage score of 56.7 which put Imogen in 74th place, Imogen’s Badminton went from strength to strength. She and Ivor Gooden jumped clear across country, albeit with 26.4 time penalties, moving up to 30th place, and topped that off with a clear showjumping round inside the time. Imogen finished 21st.

“I just wanted to go clear across country,” said Imogen. “Ivar Gooden has got it all – there’s no other horse I’d rather have been sat on. I’m so proud of him, he’s really risen to the occasion. At my age, I’m not naïve enough to think that it’s going to be this good every time, so I’m going to enjoy the moment.”

Lynn Symansky (USA) & Donner: The flight across the pond was worthwhile for Lynn. She lay in 27th after dressage with a score of 47.2 before moving up three places after a steady cross country clear which added 30.8 time penalties to her score. With eight to add from the showjumping Lynn completed in 22nd place

Thibaut Vallette (FRA) & Qing du Briot ENE HN: Thibaut got off to a cracking start and was Thursday’s overnight leader after posting a score 38.7. By the end of the dressage phase the pair were in 7th place but 20 penalties at the Lake (8) dropped them 29 places going in to the final day. Thibaut finished his competition in style with a clear round for 27th place.

Cathal Daniels (IRL) & Rioghan Rua: Cathal had a terrible time in the dressage, his mare napping badly time and again. They languished at the bottom of the score board at the end of that phase with an eyewatering score of 84.6. However, Rioghan Rua made amends on cross country day, the pair jumping clear for just six time penalties, one of the fastest rounds of the day which moved them up to 33rd. The showjumping was more expensive but despite three rails down he retained that place.

Ciaran Glynn (IRL) & November Night: Irish first timers were out in force this year. A mid-league dressage score of 52.3 put Ciaran in 56th place but he climbed up to 35th with a cross country clear, albeit with 41.6 time penalties. Three rails down plus three time penalties meant he & November Night dropped one place to 36th.

Pietro Sandei (ITA) & Mouse: Dressage is obviously not Pietro’s favourite phase; with a score of 69.6 he sat in 81st place ahead of the cross country. He took the steady clear option, adding 46 time penalties to his score whilst climbing up to 44th place. He and Mouse also show jumped clear and finished the competition in 40th place.

Dominic Furnell (IRL) & Ballycahane Flower Power: Also near the bottom of the table after the first phase, 80th on a score of 65.8, Dominic came close to posting a cross country clear. However, a broken frangible pin at the PHEV Corral (19) incurred 11 penalties. This performance still moved them up to 45th place overnight and they completed in 42nd place after lowering two poles in the showjumping.

“After watching a few cross-country rounds I was shaking in my boots, but once I got in the saddle, I was grand. She’s as honest as the day is long but a bit hard to ride… she has her way of doing things sometimes – about 20 strides after leaving the start box, she bucked and ripped off a front shoe so I did the whole course with three shoes,” said Dominic, one of the most garulous riders of the event.

Tom Jackson (GBR) & Waltham Fiddlers Find: 31st after dressage with a score of 47.5 Tom dropped down the order with two refusals at the Joules Corners (21) having ridden a great round bar that. They lay in 48th place after cross country. One rail down on the final day gave Tom a final placing of 46th.

“He’s been amazing all week and I’m hopeful we’ll be back to get the result we wanted. There’s no other event like Badminton. I try and keep myself in a little bubble but you can’t help but be slightly overwhelmed with everything. Until I had my first mistake on the cross-country, he just felt amazing – I know that I can get that feeling again next time,” said Tom.

Alexander Bragg (GBR) & Zagreb: a solid dressage performance warranted a dressage score of 44.6 for this pair, who were third into the arena on the Thursday morning. They enjoyed a fabulous cross country round, adding 12.4 time penalties to their first phase score but, disappointingly, they withdrew from the Hold Box at the final Horse Inspection.

As a young fan asked for his autograph after the cross country, Alex quipped: “I’m not used to this famous stuff!”

Lissa Green (GBR) & Malin Head Clover: One of the most enthusiastic first times has to have been Lissa. Despite scoring 60.2 to lie in 79th place after dressage, Lissa was still effusive:

“I couldn’t have asked for more – all our mistakes were positive ones, he was trying so hard for me. If I get half way round the cross country I’ll be happy.”

She did better than that, picking up just one refusal at the Outlander Bank (13) plus plenty of time penalties, but like Alexander Bragg, withdrew from the Hold Box at the final Horse Inspection.

After their cross country round Becky had said: “I don’t deserve a horse this wonderful. I knew he could do it but I’m over the moon.”

Claas Romeike (GER) & Cato 60: Claas broke the 50 barrier for his dressage, scoring 48.0 for 33rd place. However an early stop at the Savills Staircase (5), followed by another at the Outlander Bank (13) resulted in Claas retiring before the Mirage Pond (17).

Hannah Sue Burnett (USA) & Harbour Pilot: A competitive dressage score of 44.9 saw Hannah Sue in 20th place, but after a refusal at the Lake (8) she raised her hand and walked back to the stables.

Shane Rose (AUS) & Shanghai Joe: after scoring a 51.7 for their dressage the pair parted company at the PHEV Corral (19b).

Caroline Chadelat (FRA) & Kadessia: this pair posted a 56.3 dressage score but suffered a horse fall at The Hildon Water Pond (15).

Sidney Dufresne (FRA) & Reliquaire: 46th after dressage with a score of 50.9, Sidney’s Badminton ended prematurely with three refusals at the Savills Staircase (5).

Danielle Dunn (GBR) & Zocarla BLH: Danielle’s dream was shattered when, after a dressage score of 59.6 she parted company with Zocarla jumping out of the Lake (8).

Gubby Leech (GBR) & Xavier: Gubby & Xavier were awarded a mark of 51.5 for their dressage test to lie in 48th place. Unfortunately a refusal at the Outlander Bank (13) was followed by a horse fall two fences later at the Hildon Water Pond.

Willa Newton (GBR) & Chance Remark: Willa & Chance Remark performed a good test to score 46.2 for 25th place going into the cross country phase. Sadly Willa then had a day to forget on Saturday. Awarded 50 penalties for jumping the wrong side of the flag at fence at the Lake (8), she picked up a refusal at the Outlander Bank (13) before suffering a horse fall at the log drop in to the Hildon Water Pond (15)

James Sommerville (GBR) & Talent: James suffered the same fate as Sarah Parkes. 69th after dressage on 56.1, he took a tumble at the PHEV Corral (19).

Arianna Schivo (ITA) & Quefira de L’Ormeau: A solid dressage performance from Arianna gave him a start score of 52.1 and 55th place. Her cross country experience, however, was short lived. Quefira de L’Ormeau hit the top of the Rolex Rolltop (2) and the pair suffered a horse fall.

Katherine Coleman (USA) & Longwood: Mid-way down the pack after dressage with a 53.6 score, but 20 penalties at the Lake (8) was quickly followed by a horse fall at the Offset Oxer (9).

Elisa Wallace (USA) & Simply Priceless: Elisa’s dressage was more lit-up than she had hoped, scoring 53.2, but things were to get worse. Within sight of the finish she was still clear – but a tired horse failed to cleanly clear the last and both horse and rider fell.