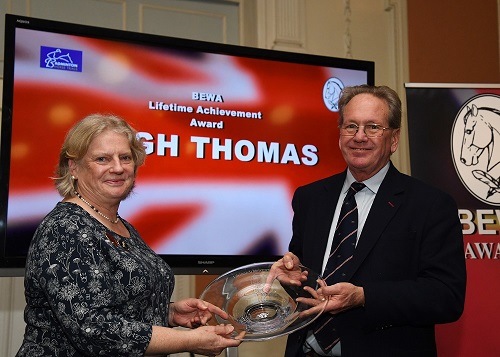 Hugh Thomas who was the Badminton Horse Trials Event Director for the past three decades, before his retirement in June this year, was yesterday awarded with the BEWA Lifetime Achievement Award 2019 during the annual BEWA awards lunch at Olympia International Horse Show in London.

He was nominated by members of BEWA for being “the true definition of multi-talented, one of the strongest intellects in the horse world and an articulate advocator.”

Kate Green, current deputy editor of Country Life and Vice Chairman of BEWA who read the citation before Hugh was presented with his award said: “Hugh has seen equestrian sport from all sides, as a rider at the highest level, a presenter for the BBC, as someone involved in its marketing back in the glory days and as a chairman of several committees, both national and FEI, often parachuted in to troubleshoot and ‘cut through the waffle’.

“That incisive analysis could, at times, be scary, but we know that it belies a kind heart and deep loyalty to friends and colleagues.

“Hugh’s career began in the Hampshire Hunt Pony Club at around the same time as – and not a lot of people know this – the band Genesis was practising in his father’s loft. His career peaked with world championship medals in 1974, second place at Badminton in 1976 and representing Britain at the Olympic Games.

“As a technical delegate, he helped ensure the success of one of the most technically demanding Olympic Games, at Atlanta in 1996. His course-designing career has spanned seismic changes in attitude; it started back in the days when it was perfectly acceptable to wipe out one-third of the field at one fence!

“But it is as the wise guardian of the most precious equestrian event in the calendar for three decades that we are most grateful, preserving its integrity and place in the world.”