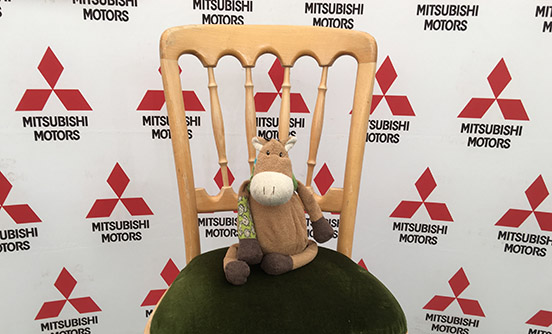 Ben Hobday – who has himself suffered cancer – will tackle the Cross Country course with Willberry Wonder Pony strapped on his back...

Willberry Wonder Pony has taken social media by storm over the last few months. He was bought at last year’s Mitsubishi Motors Badminton Horse Trials as a gift for 17 year old Hannah Francis. The promising young rider had just discovered that she had an aggressive bone cancer in her pelvis and right hip joint.

Little did Hannah realise that one year on, the soft toy horse would have become a household name in the equestrian world, with tens of thousands of followers on social media and having raised over £110,000 for charity.

On Saturday, Ben Hobday – who has himself suffered cancer in the last year – will tackle the most famous Cross Country course in the world riding Sallie Ryle’s Mulrys Error, with Willberry Wonder Pony strapped on his back, to raise awareness of Hannah and the legacy that she wants to create.

Bought by her show jumping trainer Jayne Smart as a mascot to be with Hannah through her rollercoaster journey, Hannah created a ‘wonder pony’ who wanted to share his cancer story. “In 10 days I had 10,000 instragram followers, now it’s 33,300 – how crazy is that?” says Hannah. Willberry Wonder Pony also has 10,000 Facebook followers, 5,000 on Twitter and 500 on snap chat.

“I’ve probably achieved more in the past 12 months than I would have done in my entire life [without cancer]. People have been so unbelievably generous to help me realise things on my never-ending bucket list. Every day of my life has been made to count because we don’t know how long I have left. Even when the day comes that I won’t be able to get up in the morning I want you to continue to keep fighting for me so together we can beat cancer.”

‘Hannah’s Willberry Wonder Pony’ has now been granted charity status, with Ben Hobday as its Patron. Donations will fund bone cancer research, and also help towards a new project, ‘Willberry’s Wishes’. “This allows seriously ill people like me [but not just with cancer] to have their dream of some kind of horsey experience granted by Willberry, just as he’s granted so many of mine. Having a goal to aim for gives you drive and fight and determination when getting up can be a serious struggle because you know that you are fighting a losing battle,” Hannah explains.

Ben Hobday confesses that he is extremely proud to have been asked to be Patron of Hannah’s charity. “I’ve been in her shoes. It’s crucial that we raise awareness and funds, and find a cure for this disease.

“Willberry’s Wishes, which will grant wishes to terminally ill children, is so important. Providing an opportunity for those who are in such an unlucky position to do something they never expected, to make them smile, is so important. We should do anything we can.”

Follow Hannah and Willberry Wonder Pony on social media. The new Charity will have a Just Giving page in the next few days.