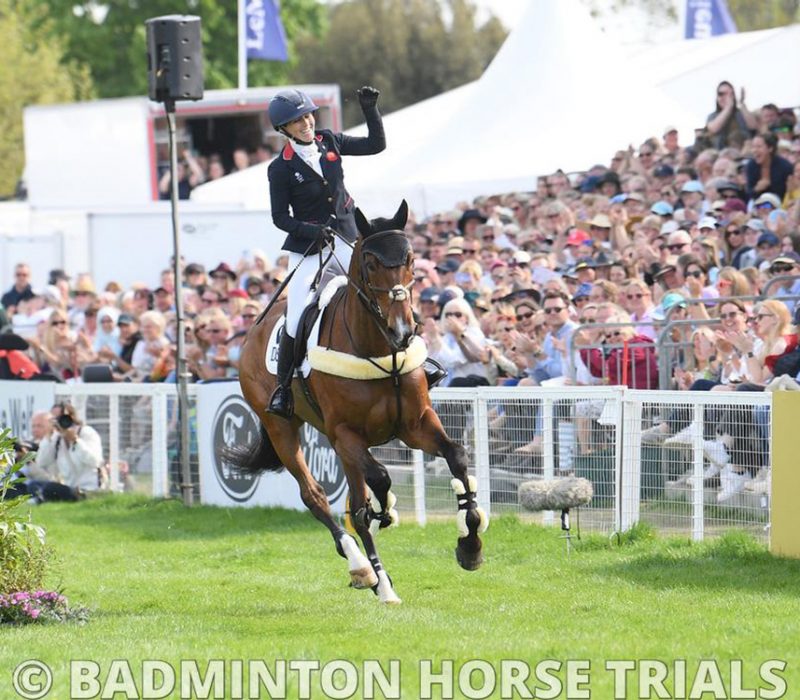 Laura Collett realised a childhood dream as she won Badminton Horse Trials, presented by Mars Equestrian, after a superb performance on Karen Bartlett and Keith Scott’s London 52. Laura’s finishing score of 21.4 — she added a mere 0.4 of a show jumping time penalty to her dressage mark — is a record completion score for Badminton.

Runner-up Ros Canter, the only rider to finish on her dressage score, showed she has another world champion in the making with the 10-year-old Lordships Graffalo, while Oliver Townend cemented his world number one position with third and fifth places on Swallow Springs and Ballaghmor Class respectively, each of his greys hitting a fence apiece.

It was the first British one-two-three since Pippa Funnell led William Fox-Pitt and Leslie Law 20 years ago in 2002, and Laura Collett revealed that Pippa’s win on Supreme Rock had been her childhood inspiration. ‘I was going round the cross-country on my aunt’s shoulders and I wanted to be Pippa Funnell winning Badminton,’ she said.

When Laura entered the arena, she had the luxury of a fence in hand over Ros, but the pressure was huge. ‘That horse is amazing,’ she said of her Tokyo Olympic gold medallist. ‘He jumped his socks off. I couldn’t see a distance anywhere but he just got higher and higher.’

Ros was full of praise for her new superstar who was contesting his first five-star. ‘”Walter’s” eyes were on stalks when we arrived but he enjoyed every part of it – especially the prize giving. He will have learnt so much in the last few days.’

Piggy March and the gallant 17-year-old mare Vanir Kamira, the 2019 Badminton winners who set the early standard on the cross-country, finished an honourable fourth with just one pole down. ‘I think that’s the best “Tilly” has ever jumped. She left her heart out on the cross country course yesterday so I was a bit worried today, but shouldn’t have been.’

David Doel, who lives just 20 minutes down the road, had a dream debut, finishing in sixth place on Galileo Nieuwmoed with a double clear, and Kitty King, a member of last year’s winning European championships team, was seventh on Vendredi Biats.

After a gap of three years, support for the event was huge. One hundred and eighty thousand visitors attended over the four days, and the many tradestands did a roaring trade, delighted to be back.

‘It was everything I could have wished for,’ said Event Director Jane Tuckwell. ‘Lots of happy people, fantastic result, wonderful sponsors in our presenting partner Mars Equestrian and our official partner Lifesource BP, it’s a dream come true. Bring on 2023.’