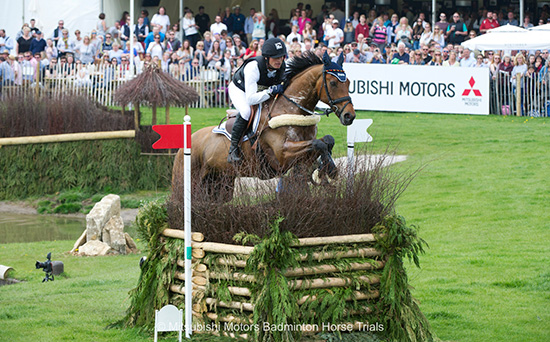 MICHAEL Jung (GER) cannot be headed on Cross Country day at the Mitsubishi Motors Badminton Horse Trials. The German rider took a giant leap towards his quest to become only the second ever winner of the Rolex Grand Slam when he finished clear and inside the time on La Biosthetique-Sam FBW.

The course is proving every bit as tough as riders predicted, but the German combination made it look effortless, coming home seven seconds inside the 11min58sec optimum.

“In my head I had many options at the difficult fences, but he made it seem easy,” said Michael. “When I sit on him and I can feel his power and focus that’s a great feeling. He is a very good Cross Country horse and can do the strongest courses in the world easily.”

Michael’s score of 34.4 currently leaves him more than 11 penalties ahead of pathfinders Oliver Townend and Paul Ridgeon’s Armada. This was a fifth clear round for the 17-year-old and a fourth inside the time.

“He’s changed a lot over the years and has slowed up a bit,” said Oliver. “He realises he doesn’t have to put in so much effort over the smaller fences and doesn’t give them much air, which can be a bit unnerving, but he still managed to make it feel quite easy.”

“I’m not sure what he’ll do in his retirement – he won’t be doing Dressage or going Show Jumping, though,” Oliver laughed.

Gwendolen Fer (FRA) and Romantic Love enjoyed a brilliant round, finishing clear inside the time to stay on their dressage score of 47.1 and currently occupy third spot. This makes Gwendolin the third French woman to jump clear around Badminton this century, and the first inside the optimum time.

But there have been some unexpected problems for some of the most fancied contenders.

Emily King (GBR) and Brookleigh is the only rider who could put significant pressure on Michael Jung. If they can go clear and inside the time they will be less than a Show Jumping fence behind the German. Emily and Brookleigh will leave the start box at 2.48pm.

To watch the action unfold on the livestream, click here.