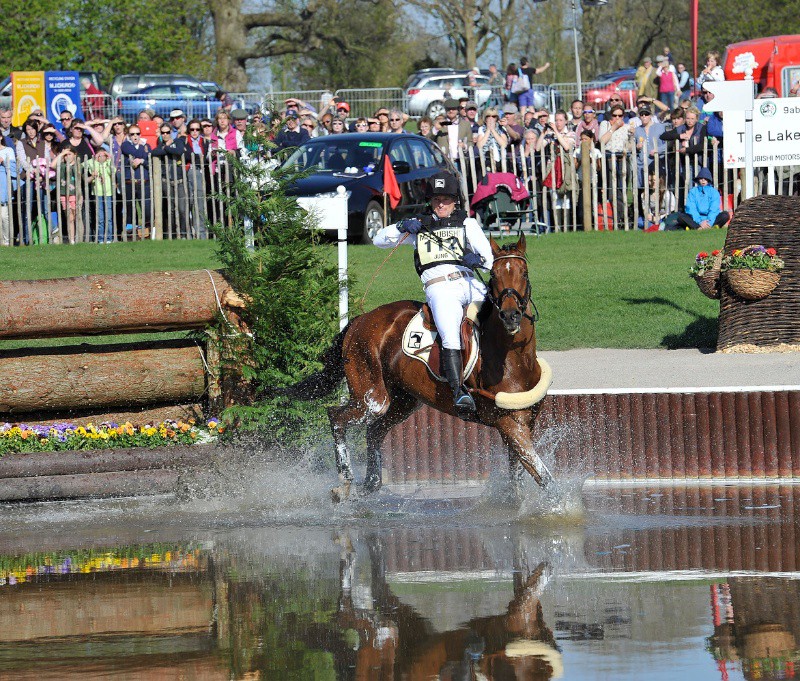 The pair lived up to expectations, delivering a near-flawless performance around Hugh Thomas’ 30-fence course – bar an anxious moment in the Lake when Sam left a leg at the log going in.

Michael said: “It was a great round and Sam was in very good form. He galloped easily. [At the Lake] he managed the situation very well. It was not so easy getting to the narrow brushes, but he kept his balance and we made it through. He finished fresh and we’re looking forward to tomorrow.”

New Zealander Jonathan Paget rose up from fourth place after dressage into second with a clear round inside the time with Clifton Promise.

He said: “Promise always sets off a bit strong and nervous. To me he felt almost too keen until the last couple of minutes, but the ground was very good and he travelled well across it. Overall the course rode like a like a four-star track.”

William Fox-Pitt and Parklane Hawk’s clear round, one second inside the optimum time, has guaranteed a thrilling final chapter to the Rolex Grand Slam story tomorrow. By finishing closer to the 11min13sec optimum time than Michael, both he and Jonathan have put themselves within a fence of the overnight leader.

William, who had a run-out at the HSBC Market Square (fence 21) on his first ride, Oslo, said: “Oslo and Parklane Hawk are very different, but they both gave me great rides. Naturally I was very disappointed about my 20pen on Oslo – I didn’t steer him properly – but on Parklane Hawk I managed to keep hold of my reins.”

On tomorrow’s showjumping, William said: “We’ve got a long way to go, starting with the trot-up. I’m not going into the showjumping in the lead, so I’ve got to rely on the two guys above me making mistakes – and I’ve got to go clear.”

Fifty-eight of the 83 starters were clear jumping, 23 of them clear inside the optimum.

Tomorrow’s final horse inspection takes place at 8.30am. Showjumping for the lower-placed riders provisionally starts at 11am, while the top 20 jump at 1.30pm.