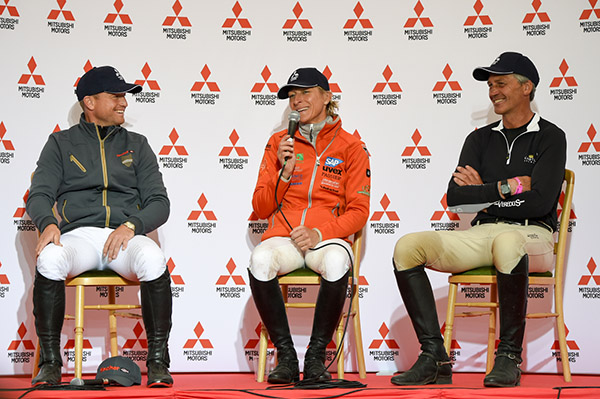 Ingrid Klimke (GER) and Horseware Hale Bob OLD have climbed up one place to lead the field, adding just 3.2 time penalties to their dressage score. There was a moment of concern for Ingrid as she was initially given 11 penalties for breaking a frangible pin on one of the upright gates near the end of the course, but these were removed when the Ground Jury reviewed the footage.

“’Bobby’ really deserved that, he was fantastic all the way round. Everything came up really quickly and he wanted to go so fast that it was pure fun,” beamed Ingrid.

With an advantage of just 0.4 of a penalty over reigning Badminton champions and double Olympic gold medallists Michael Jung (GER) and La Biosthetique Sam, there will be no room for error by Ingrid tomorrow, but she confessed: “Normally I have no worries for the show jumping with him.”

Performance of the day was undoubtedly that of Jung and ‘Sam’ who made Eric Winter’s first course here look like a Pony Club track, coming home inside the optimum time. Michael moved up from ninth after dressage.

“I am always a bit nervous at the beginning of a big course but it is amazing to feel such trust from a horse. Sam started out quite strong and I didn’t have too much control but he understands me so well and is so quick.

“Our preparation hasn’t been ideal, Sam has only done one Two Star, but he feels more powerful than ever and I am absolutely happy.”

Michael was one of several riders sporting a Wilberry Wonder Pony on his back – he met Hannah Francis at last year’s Badminton. “I don’t know how to explain in English, but to be able to help ill children in this way is a very good idea, and something I can do.”

The final combination out on course, Andrew Nicholson (NZL) and Nereo, complete the top three. Whilst the lead was within their grasp the normally speedy Nereo slipped several times which perhaps contributed to his 2.4 time penalties.

After his round Andrew explained: “Nereo relies on the back end to push his power through. The first time he slipped was at the footbridge which is a fence he’s not keen on, so when he slipped it actually took his mind off it.

“I knew when I’d finished that all his shoes were still on, but my groom has since told me that I lost a stud in the outside of a front shoe and two out of a back shoe. Nereo does slip a bit, he’s a big powerful horse and when the ground is dry with grass cover, he does tend to slip. It wasn’t a big problem, and probably only cost me a couple of seconds.”

Only one horse bar ‘Sam’ made the optimum time, and this was in the closing moments of the day. Tim Price (NZL) and Xavier Faer beat the clock by one second and have climbed an impressive 30 places, up into fourth from 34th after dressage.

There were some notable performances from British riders after a disappointing dressage phase. Ros Canter and Allstar B have climbed from 20th to 6th with a stylish round which made up for Ros having to withdraw after the dressage last year.

“I was prepared for another roller coaster day, but ‘Alby’ was foot perfect. After making small errors at Burghley a couple of times I had to go out believing we could do it. That’s why I played the safe route at one of the combinations – I was having such a good time and I didn’t want to mess up.”

Oliver Townend’s second ride ODT Ghareeb leapt 40 places up the leaderboard to lie in 7th behind Ros, while Badminton first timer Alex Bragg is less than a penalty behind in 8th on Zagreb.

There were plenty of riders who had a less happy day. Dressage leader Christopher Burton’s (AUS) Graf Liberty ducked out at the Hildon Water Pond (15), while third place Jonty Evans (IRL) and Cooley Rorkes Drift faulted at the Joules Corners (21) having been foot perfect to that point.

“It was my fault. I can’t blame the horse at all, I made a mistake. Maybe it was a big ask to be in third after dressage and stay there or better it. We’ll be back next year, older and wiser,” said a disappointed Jonty.

Karin Donckers (BEL), 4th after dressage, retired Fletcha Van ‘T Verahof after a stop at the Lake (8), but perhaps the unluckiest rider of the day was Kathryn Robinson (CAN). Let It Bee was jumping beautifully, came through the lake combination and slipped heavily on the turn, depositing Kathryn on the ground.

“What an edge of the seat day of competition. While some of the big names faultered, several first timers came home clear with memories they will never forget. Even after 26 years of sponsorship at Badminton, the cross country phase never stops being totally compelling,” said Lance Bradley, Managing Director of Mitsubishi Motors in the UK. “With less than one fence separating the top three, tomorrow looks set to be equally exciting.” 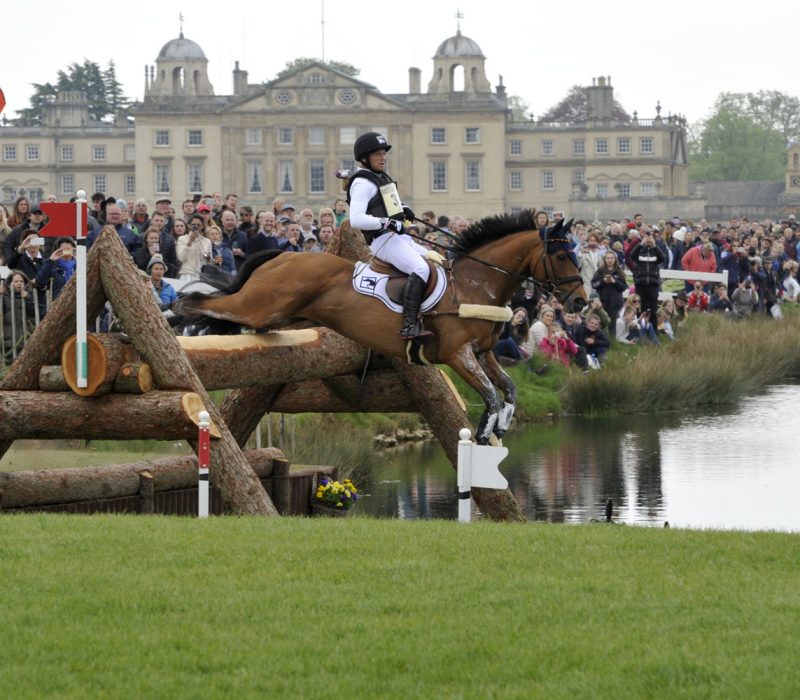