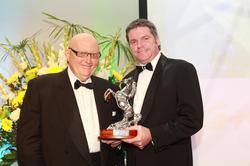 Mitsubishi Motors in the UK are celebrating today after scooping The Jacksons (C.I.) Limited Eventing Award at The Animal Health Trust UK Equestrian Awards held in London last week for their contribution to eventing through the sponsorship of Badminton Horse Trials.

More than 400 people from all walks of the equestrian world attended the Animal Health Trust’s United Kingdom Equestrian Awards at the Royal Lancaster London on Thursday 3 November.

Mitsubishi Motors in the UK, who were nominated by British Eventing, a panel of judges and the general public, are the first sponsor to ever win this award.  Previous winners have included Pippa Funnell, Zara Phillips, Mary King and the GB Gold Medal Team of 2009.

“The winners of the awards are decided not only by a panel of judges, but also by votes from the public, so we are delighted that the work and support we put into to Badminton is recognised by such a wide and appreciative audience.”

“The Equestrian Awards is a fantastic showcase of the equestrian talent in the UK. 2011 has been a wonderful year for our equestrian sports and the awards really do celebrate all of the incredible achievements.

“We’re particularly grateful to all those who sponsored either an award or part of the evening and helped us raise a fantastic sum of money which will enable the AHT to continue its very important work.

“With London 2012 fast-approaching we’re incredibly excited about next year’s event and hope to have several equestrian athletes to honour!”

Figures are still to be finalised but it is hoped that the annual fundraising event has raised more than £50,000 for the Newmarket-based veterinary charity.

For further information, images and video content please contact the Mitsubishi Press Office on: 01285 647 200 or at mitsubishipress.co.uk

The Animal Health Trust is an independent charity, employing over 200 scientists, vets and support workers. It aims to improve the health and welfare of horses, dogs and cats through research. It also provides specialist referral services and continuous education to vets.