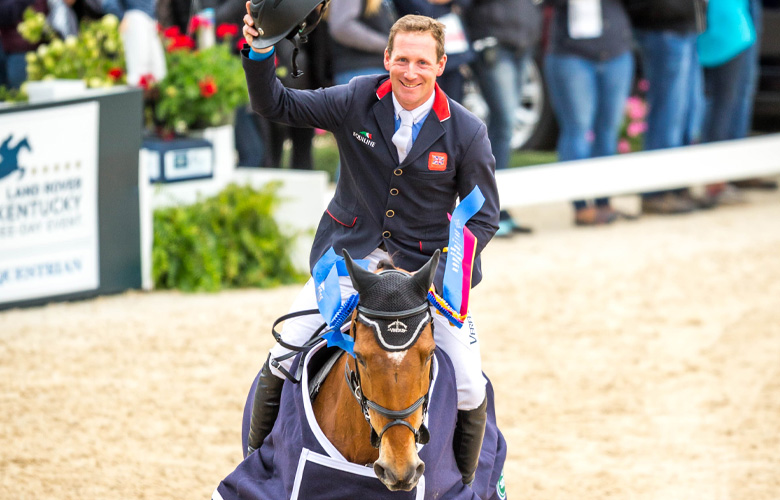 Great Britain’s Oliver Townend is the rider that heads to the Mitsubishi Motors Badminton Horse Trials with the wind in his sails after a win at the Land Rover Kentucky Three-Day Event April 25-28, 2019. Townend rode Cooley Masterclass to victory at the 5* event but is yet to decide which two of his three entered rides he will compete at Badminton this week to take on the second leg of the Rolex Grand Slam.

> Find out more about Oliver and his horses Ballaghmor Class, Cillnabradden Evo and Ulises

Third placed Tim Price also has two rides at Badminton this year and will be competing against his wife, Badminton’s defending champion Jonelle Price.

With just one pole separating the top three riders on the final day of Kentucky, the electric atmosphere turned into tension when Tim Price (NZL), lying in third place, produced a stunning clear round to put the pressure on the final two athletes. All eyes were then on home hero, Boyd Martin (USA) and Tsetserleg, with the patriotic crowd eager for an American victory for the first time in 11 years. An eruption of applause echoed through the stadium as Martin cleared the final fence and was just one horse away from victory. Silence fell as Oliver Townend and Cooley Masterclass entered the arena, hungry to defend their 2018 title. With nerves of steel, Townend delivered a faultless round, denying the home victory for Boyd Martin, and making history to become the first ever British equestrian to win back-to-back Land Rover Kentucky Three-Day Event titles.

With tears glistening in his eyes, an emotional Oliver Townend commented: “I am so proud, I can’t say what this means. It’s a huge team effort, it hasn’t been an easy journey but we always believed in him and the horse is pure class – it was just my job to press the buttons at the right time and he delivered again. This is one of the biggest events in the world and it’s an eventing childhood dream to win at the highest level.”

The Rolex Grand Slam links the three great five-star horse trials of Badminton, Burghley and Kentucky and is considered one of the great feats of the sport. It has only ever been won twice since its inception, last at Badminton in 2016 when Michael Jung took the title, 13 years after British Pippa Funnell won it at Burghley in 2003. Oliver’s last attempt at the Grand Slam title was Badminton 2018 having won Burghley in 2017 and Kentucky in 2018.

Winners of the Rolex Grand Slam receive an extra $350,000 in addition to their winnings from each event which at Badminton is at £100,000.