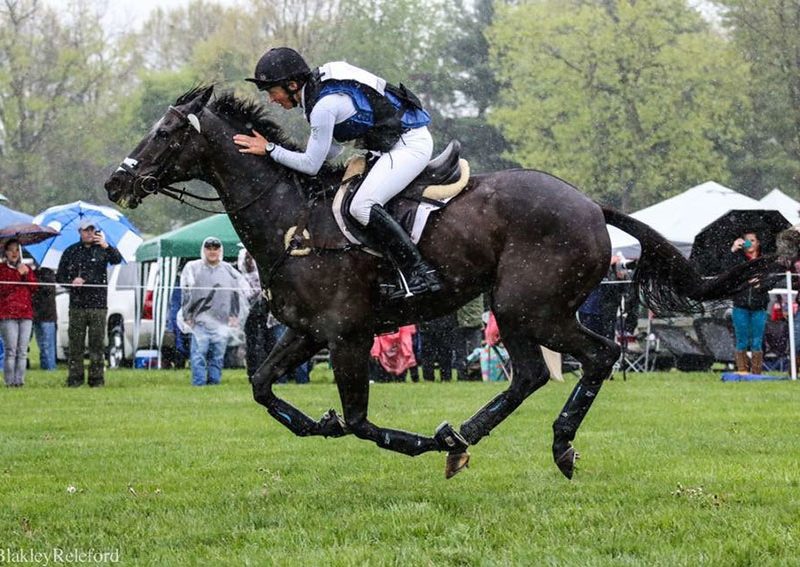 "It all seems surreal. I keep pinching myself to make sure this is not a dream"

Elisa Wallace is travelling to Mitsubishi Motors Badminton Horse Trials 2017 for the first time, from her home in Georgia, USA. She will be blogging about her experiences – here is her first blog:

Badminton Horse Trials is one of the crown jewels of Three-Day Eventing. To say that I’m totally excited to compete for the first time would be an understatement.

I can still vividly remember, as a kid, watching (over and over) the amazing Mary King and King William win in 1993. I remember the heroic one-stirrup ride of Mark Todd on Bertie Blunt in 1995 like it was yesterday (you can watch the video from Badminton’s archives here).

It all seems surreal. I find myself frequenting the Badminton website over and over, scrolling through the competitors page, and looking for my name. I keep pinching myself to make sure this is not a dream.

A little bit about me. I come from a very supportive horse-passionate family. My father is an avid eventer and my mother rode when she was pregnant with me. I was riding before I could walk and competed at my first event when I was four years old. I have always loved eventing and it has been a lifelong dream to compete alongside the best of the best at Rolex, Burghley and Badminton.

I was well on my way to achieving my dream when, in 2012, both of my top horses were injured and had to be retired. On a whim, I decided to enter a mustang training challenge. It was a way to tick “training wild mustang” off my bucket list. Little did I know how much this whim would impact my life and help me develop my fluency in equine communication. After winning an Extreme Mustang Makeover with ‘Fledge’ I competed in the Mustang Million with ‘Rune’ and was invited to compete at the Mustang Magic with ‘Hwin’.

America’s wild mustangs are in a bit of a pickle. There are now 50,000 in short term holding facilities and only 35,000 remaining wild. I have now trained 13 mustangs and I have adopted 3. In a general way, I work to help educate and raise awareness about the American Mustang, spreading the message that they are valuable horses worth saving. Similar to the thoroughbred, they are often overlooked, misunderstood, and stereotyped. I have done mustang demonstrations with Fledge and Rune at three consecutive Rolex events (I’m sad that I can’t do one again this year because of the overlap with Badminton), and Hwin has recently become a Breyer toy model. With help from one of my most ardent supporters, Ellie Phipps-Price, I am on a mission to find and train an American mustang to compete at the Advanced level in three day eventing. This would be a first, and a very important moment for this misunderstood breed.

Even as the mustangs opened my eyes to new possibilities and helped me to develop as a horseman, I still yearned to return to upper-level eventing. As luck would have it, I received a life-changing phone call from my Dad in 2013. Some clients of his needed a rider for a talented three-star horse recovering from an injury. I knew of the horse and had seen him while he was rehabbing. I actually remember looking at him in the stall and thinking to myself, “It would be amazing if I could get a ride on a horse like that.” Well, the fates decided to work in my favor and he came to train with me in Jasper, Georgia in May 2013.

Aptly named Simply Priceless (because he is just that), ‘Johnny’ is a striking 2001 black 16.3hh Australian Thoroughbred gelding who raced 10 times under the name Kalinga Damo in Queensland. He is now owned by the Simply Priceless Syndicate (two shares are still available). He is your classic three day event thoroughbred, and I often think he would have loved the long format days. He has definitely come a long way in the four years I’ve had him. I am his number one fan.

I’ve always had big dreams of competing at Badminton, Rolex and Burghley and of making the United States Equestrian team. It feels so surreal to start checking off some of those goals. It’s all because of Johnny. We have now completed TWO Rolex Kentucky Three Days (top Rookie and finishing 17th in 2015, and placing 8th in 2016). We completed our first Burghley last year, finishing 14th (highest ranked American). We were named as an alternate for the Rio Olympics, and now have the chance to compete at Badminton. I still can’t believe it.

Johnny is hands down the best cross country horse I have ever ridden. He has an amazing gallop, a heart of gold, and is the most sensitive, controlling, dual-personality horse you will ever meet. He may seem like a puppy dog walking around with his head low. He ground ties, rides bareback and bridleless, smiles on cue for his favorite treats (stud muffins), and has great manners (for the most part). But don’t let this fool you. He is a dragon too. The most challenging part in handling him is while walking back to the barn after cross country or the Jog. Silly horse. I’m often teasing him, “You are supposed to be tired!” He is a highly strung, nervous horse by nature. He likes for everything to stay exactly the same. He HATES bugs and especially butterflies (hopefully there aren’t any at Badminton).

My season preparation never really looks good on paper, but Johnny has taught me not to sweat the small stuff and we have been able to better each of our four star performances year over year. He just thinks the smaller shows are ridiculous. Dressage is for the birds. Show jumping gets in the way. He would much rather get on with it and just run the cross country.

We had our last run at the Carolina International CIC*** and while our dressage score didn’t necessarily reflect it, he was much improved over last year. He cruised around the Ian Stark cross country course like it was child’s play. But our show jumping wasn’t spectacular – our 5 rails didn’t leave me feeling great. Show jumping has been our nemesis and we have been working really hard to improve. Johnny is much better if he can do show jumping after cross country. He is even better if he can run cross country for 11 minutes. Knowing this eases my mind a little, but we are working hard with our coach Karen O’Connor to earn that elusive clean round.

Also as part of my prep, I’m heading over a bit early to Katherine Coleman’s yard. I did the same last year before Burghley, and found that Johnny really enjoys the cooler England weather. This will also be a great time to adjust to the footing, and really focus for our lead up to Badminton.

Competing at Badminton will be a dream come true indeed. I look forward to blogging during the event, as well as producing daily video blogs with my husband, Timothy Harfield. You can follow my journey here as as well as on Facebook and YouTube.

We fly out the 12th of April and I can’t believe it.  Maybe I should get to packing…