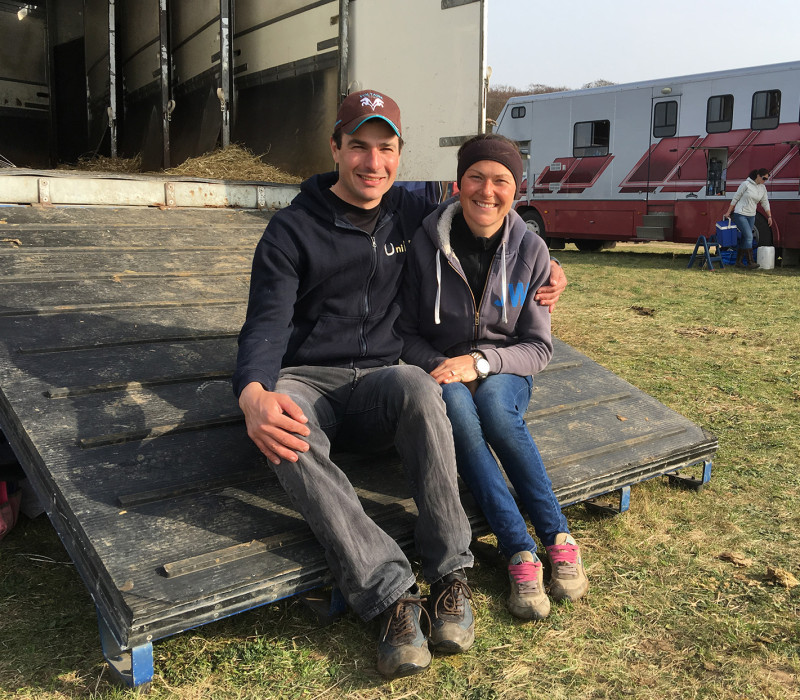 Giovanni Ugolotti and his fiancee Kathryn Robinson are both entered in this year’s Mitsubishi Motors Badminton Horse Trials. It is a third attempt for Italy’s Gio, but the first for Kathryn, who was born in the UK but rides for Canada. Both have ridden for their country.

Gio rode for the Italian Army Equestrian Team for several years. Having met Kathryn in Italy, he moved to the UK in 2008 to work for Andrew Nicholson before he and Kathryn set up a yard together. Kathryn will ride Let It Bee, and Gio rides Oplitas. Here is the first blog in a series from the pair:

‘I bought Bee from Germany as a seven-year-old, having fallen in love with him the minute I saw him,’ says Kathryn. ‘He was with an amateur rider and had not really done much, despite being bought by his previous owner from the Top Eventers auction in Luhmühlen. We never thought that he would come all this way.

‘To be honest, he’s not really built for the job and is a rather funny shape – he is very long, a bit like a ‘people carrier’; I call him my black limousine. He has absolutely no thoroughbred in him so I have to make sure that I keep him super fit, but he has the biggest heart. Sometimes I think that’s the most important thing.

‘He has a wonderful character, always wants to please and checks everyone and everything out with lots of sniffing! We’ve worked our way up from BE100 to finish 7th at Pau CCI4* in 2014, and we represented Canada at last year’s Pan Am Games. A few years ago I would never have believed that possible. To now be heading to Badminton is a dream come true – I’m really excited about it.’

Gio continues: ‘Oplitas is the full brother of Armada and Nereo, so he has a lot to live up to! I bought him from Andrew Nicholson in 2012; Andrew had loaned him to my fellow Italian Stefano Brecciaroli to compete in Italy while building points ahead of the London Olympic Games, and when I tried him I really liked him. Two days after the deal was done we finished 4th in the CIC3* in Montelibretti, a good start to our partnership.

‘Oplitas is one of the most sensitive horses I have ever ridden and he can be very tricky on the flat. You need endless patience but he has taught me a lot – he doesn’t let me get away with anything. Across country, though, he is incredible; he’s very easy to ride and very fast if I let him be.

‘Kathryn and I started our preparation for Badminton early this year, heading out to Portugal. It was a good call, with Oplitas 5th in the CIC3* and Bee 7th in the CCI3*. Bee also ran at Burnham Market, having a rail down but jumping a lovely cross country clear, so now we just have to keep them safe through Belton Park.

‘We are really looking forward to riding at Badminton together – we have a great partnership and find it really helpful to listen to the other’s point of view, when working on the flat and when walking courses. Luckily we don’t have any rivalry between the two of us because it’s good for our business for each of us to do well.

‘Hopefully we can see each other’s bad points and help the other be the best that we can be. It’s important that we trust each other’s opinion and we always try to work as a team because we both have the same end goal. With luck Let It Bee and Oplitas will have a successful Badminton, fingers crossed….’