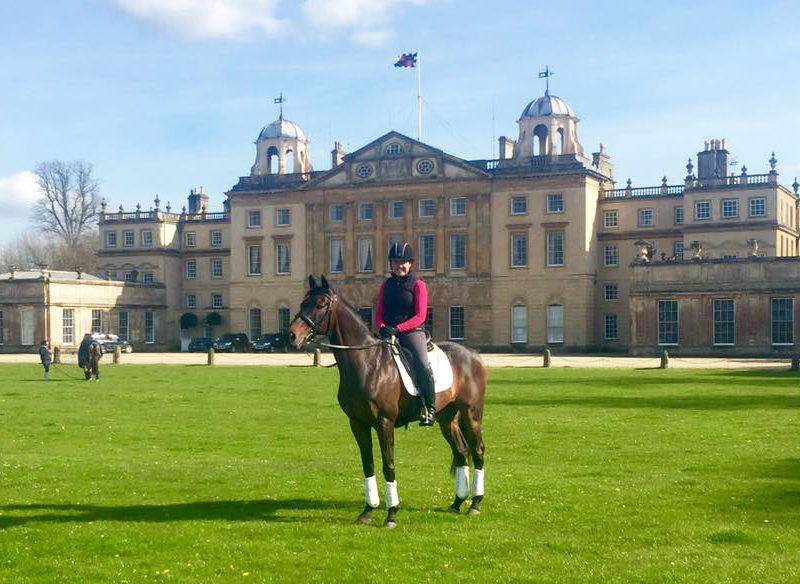 'we were in a small village rather than the typical show grounds I’ve been accustomed to in the States.'

Badminton week has finally arrived! Tuesday morning we finished up our packing and the three American horses, along with Jesse Campbell’s, loaded up and set off.

Arriving was a little bit different than most FEI events I’ve attended, as we unloaded the horses at the entrance to the grounds and from there, we led them the rest of the way to their stabling. That was an adventure in itself, as it seemed we were in a small village rather than the typical show grounds I’ve been accustomed to in the States.

Rocky is staying in the stalls situated in a building just behind the main Badminton house. The setup is beautiful and unlike anything I’ve seen up to this point! After we got him settled in to his new home, we unloaded all of our gear out of the lorry. All of the Americans combined, we filled an entire lorry just with stuff, no horses! Jesse was so nice to help us out and lend us a second lorry to transport all our equipment.

I hopped on Rocky and took him for a nice hack around the grounds and down to the schooling area. As I walked through the quiet trade fair area and the cross country course I tried to imagine how it will look on Saturday, buzzing with thousands of people. I arrived down at the schooling arena at just the right time to see Michael Jung having a canter on Sam, which is more than enough motivation to remind myself to sit up a little straighter or to not botch a change!

Tuesday evening my groom, Devon, and I sat out in front of the main house to graze Rocky. It was a nice moment to reflect on our little adventure together so far, and to try and take it all in because we know this week will be over before we know it.