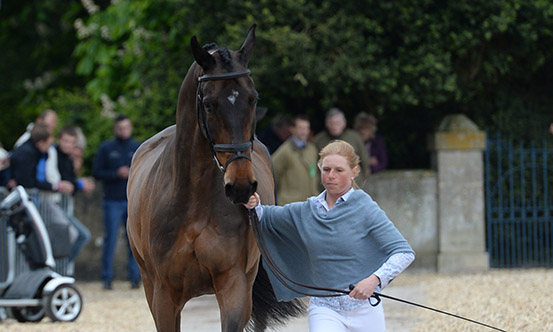 Alby was feeling pretty full of it at the trot up and although I have been told he looked amazing, I felt even smaller than usual as he towered over me...

Hi everyone, it’s 6:30am, I’m lying in bed in the lorry listening to the Beaufort hounds, which means we are at Badminton!

We have had a good last week with Allstar B, running through the dressage test, having his last canter, but most of all trying to keep everything as normal as possible which means lots of time out in the field for Alby whilst I crack on riding the others horses, most of whom are out eventing the week after Badminton.

The house move hasn’t happened although we have moved about 4 boxes in to the new house, and when my partner commented that I was taking rather a lot of bags to Badminton, I said well at least it will save time as I’ll just unpack in to the new house!

The journey down was incident free and Alby travelled well. On arrival he had a vet and passport check and then we spent a couple of hours setting up. The stables are a short bike ride away from the lorry park at Badminton so we tried to get most of Alby’s gear unloaded at the stables to be set up for the week.

Sarah also took Alby for a graze in front of the house, a pinch yourself moment when you realise that you are actually here! I spent the evening at an event riders association (ERA) meeting to discuss the recent changes to the world equestrian games (WEG) and the Olympics. It’s a side of the sport I haven’t been involved in before but it certainly opened my eyes to the importance of getting involved in order for riders opinions in our sport to count.

(later) ….it’s now nearly 8pm and I’ve just got in from riding Alby for the 2nd time today. Normally Alby is a fairly laid back kind of chap but the atmosphere here at Badminton has given him a bit of a personality transplant and he is feeling rather jolly! He was also feeling pretty full of it at the trot up and although I have been told he looked amazing, I felt even smaller than usual as he towered over me while I tried to keep a little bit of control!

We have had time to have a walk around the course. It looks amazing, certainly challenging but I’m always happy to be riding Alby as he is such a super and safe jumper.

Tomorrow (Thursday) is my dressage and I don’t go until 16:02pm so there plenty of time to get nervous. Fingers crossed it goes to plan and I can report back some good news!