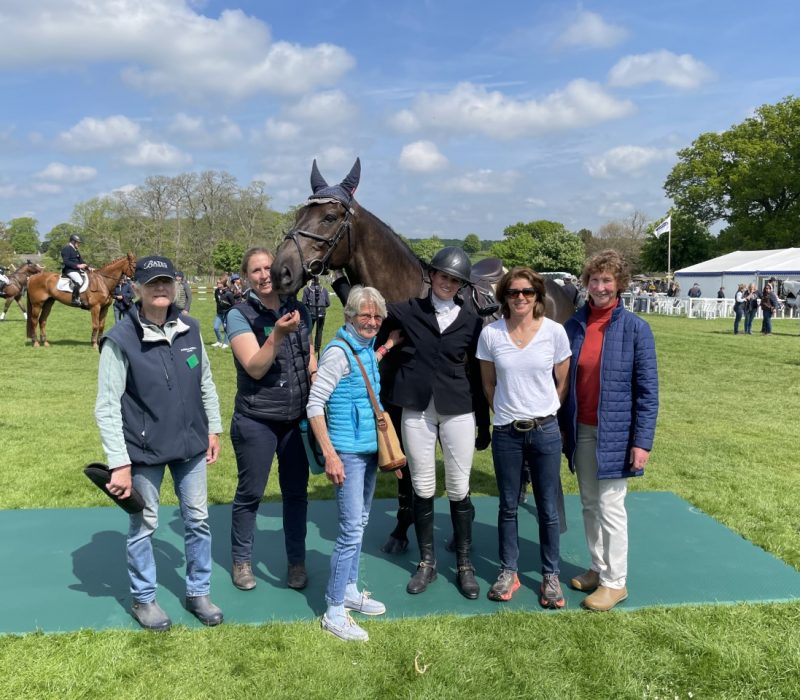 Dreams really do come true! We didn’t win but boy we are proud of ourselves!

The whole week was just an incredible experience, we were looked after absolutely brilliantly and our horses had everything they needed.

Balou was turned out to perfection by Edie all week and looked after like a King.  We did our dressage on Friday morning and Angela Tucker was very kindly there to warm up us. We had the slight misfortune of following eventual winner, Laura Collett into the ring as she produced an immaculate test so was always going to be a very hard act to follow. Balou stayed really calm in the atmosphere and produced some good work just sadly we are yet to really nail our flying changes so lost a lot of marks with those. We got a 36.5 which left us down the leaderboard at the end of the dressage but we know what we have got to work on for next time.

Cross country day dawned and the crowds flocked in. I have never seen such a big crowd at an event before and the atmosphere was buzzing. We didn’t go until after lunch so I got to watch the first few out on the course. Of the first 6 out 3 got eliminated so it didn’t do much to settle the nerves! Emma Fisher was my rock all week and had walked the course 3 times with me and helped me warm Balou up. We set out and Balou felt great but he definitely noticed the swarms of people to start with and after we jumped through the Lake, just as I felt we were starting to get into our rhythm, we were pulled up as there was a hold on course. To start with they said it was only going to be a short hold but after a few minutes they said it was going to be longer so I decided to get off Balou, by which time my boyfriend, Charlie Bradley-Hole & groom Edie had run over to me so were able to walk Balou around. It was a really difficult place to get held as there were so many people around & he stayed slightly on edge. I also knew I was about to enter the most intense and difficult section of the course. We were held for nearly 15 minutes in the end and when we restarted I struggled to get my rhythm back meaning we had a really annoying 20 penalties, quickly after we set off, at the difficult brush corner combination. It was completely my fault and he didn’t even know he had done anything wrong.  I then got my act together and he absolutely flew around the rest of the course not putting a foot wrong and pulled up full of running.

He came out so well on Sunday in the trot up and then show jumped brilliantly, just having the very first fence down, round what was a seriously technical and big course. I couldn’t have been more proud of him and yes I’d be lying if I said I wasn’t gutted to not have had a clear XC but just to say we completed is a huge achievement. I must say a huge thank you for the incredible amount of support I received in the lead up, the week of and after from so many people. It has meant so much but last and by no means least a huge thank you to Jane, Andrew and the whole Badminton team for the most incredible week. I really hope I can be back next year where we will be a year older and wiser with more experience under our belt.