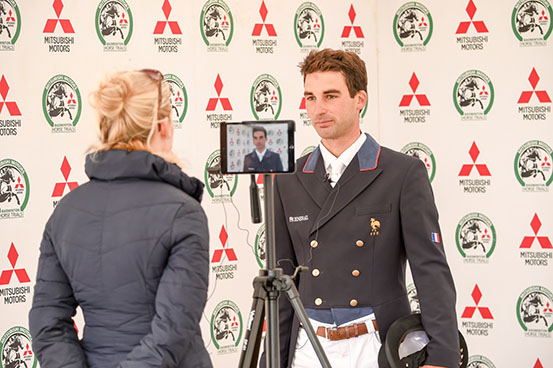 "He likes to be on the stage and is better in front of a crowd, which means I can ride for every mark..."

Despite a minor error on the final centre line, the pair performed a flowing test to score 41.5.

“He likes to be on the stage and is better in front of a crowd, which means I can ride for every mark,” said Astier afterwards. “He was a bit tight in his back after all that collection earlier in the test, hence the error, but he can be forgiven for a few mistakes.”

Sir Mark Todd also made a mistake on the final centre line, halting at G instead of I, but his otherwise foot perfect performance riding Peter Cattell and Diane Brunsden’s Leonidas II, carried him through into second place with 42.9.

“I was thrilled with him and thought it was the best test he’s done,” said Mark. “For the first time in his life he actually felt really rideable in the arena. I’m just so annoyed with myself for halting in the wrong place.”

Lying in third before lunch was Badminton first-timer Alexander Bragg who rode an active test on Zagreb to score 44.6.

“We’ve got stuff to fix and make better, but he’s gone in there, listened and delivered the best I think he can do at the moment,” Alex said.

With another strong bunch of competitors still to perform in the afternoon, including the second only ever winner of the Rolex Grandslam Michael Jung, there’s everything to play for.