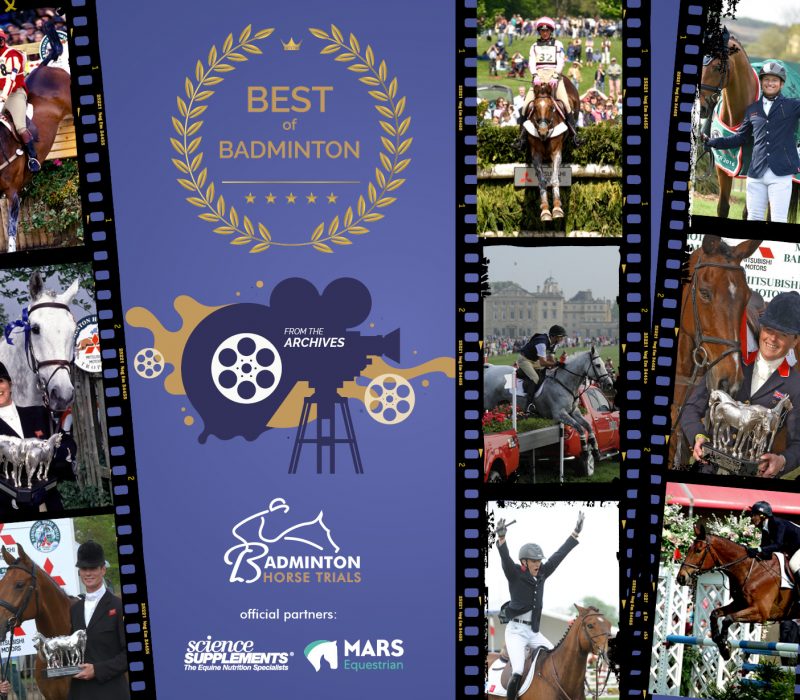 In anticipation of what would have been our 2020 event week (6 – 10 May), we have opened up the archives to give Badminton Horse Trials fans the chance re-live some classic Badminton events from 1991 to 2018.

Fans can now vote for the three competition highlight programmes that they’d most like to see again between today and 2pm on Monday 27th April.

Following the public’s shortlist of ten, our panel of Badminton experts will whittle the choice down to five shows to play over the week that the 2020 competition was due to run.

The expert panel consist of: 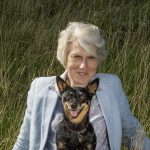 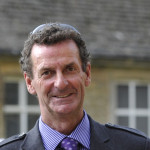 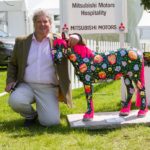 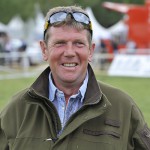 To help jog your memory…

2018 Jonelle Price (New Zealand) on her own and Trisha Rickards’ Classic Moet
Jonelle was the first female winner in 11 years, returning to the sport only a few months before having taken a short time out from the international circuit to have a baby. Paulank Brockagh and Sam Griffiths also completed their 6th Badminton.

2017 Andrew Nicholson (New Zealand) and Deborah Sellar’s Nereo
Andrew holds the record for the rider who has completed Badminton the most times. After 37 attempts and a broken neck that had almost paralysed him 18 months earlier, he finally got to lift the hallowed trophy after a stellar performance on the 17 year old Nereo.

2016 Michael Jung (Germany) on Jung Family & Erich Single’s La Biosthetique – Sam FBW
German superstar Michael Jung (GER) and La Biosthetique-Sam FBW jumped a superb clear round in the final Show Jumping phase to not only secure the win, but also the Rolex Gram Slam – the most valuable prize in Eventing – for consecutively winning Burghley, Kentucky and Badminton Horse Trials.  His final score of 34.4 was the lowest ever finishing score recorded at Badminton.

2014 Sam Griffiths (Australia) on his own, Dinah Posford’s and Jules Carter’s Paulank Brockagh
Sam climbed the leaderboard from 25th after the dressage to take the win. In a thrilling finale, where not a single horse finished their showjumping round penalty-free, Sam’s one fence down was enough to give him his first Badminton title.

2013 Jonathan Paget (New Zealand) on Frances Stead’s Clifton Promise
In a nail-biting showjumping finale, Jock turned in the performance of his career so far to pile the pressure on the overnight leader Michael Jung with La Biosthetique – Sam FBW and lift the Badminton Horse Trials trophy.

2012 Event Cancelled due to bad weather

2011 Mark Todd (New Zealand) on NZB Bloodstock’s NZB Land Vision
31 years after his debut and having ‘retired’ to New Zealand in 2000, ‘Toddy’ made his comeback onto the circuit for a bid at the 2008 Olympics. This year saw him win a fourth Badminton title aged 55, for which he earned a mention in the New Zealand Parliament and was later awarded a knighthood. In the same event, Lenamore and Caroline Powell and Comanche with James Robinson both completed their seventh Badminton together.

2010 Paul Tapner (Australia) on his own and Jenny Waaler’s Inonothing
The rain was unable to dampen the enthusiasm of Paul, a clear round in the show jumping flowing a storming cross-country round with Inonothing to lift the title.  Meanwhile Spring Along ridden by Daisy Berkeley completed their 6th Badminton.

2009 Oliver Townend on Robert & Edward Nicholson’s Flint Curtis
There was nothing to touch Oliver who aced the competition at Badminton’s 60th Anniversary event to win his first title with Flint Curtis.

2008 Nicolas Touzaint (France) on Monique Girard Claudon’s Hildago De L’Ile
Nicolas became the first Frenchman ever to win Badminton Horse Trials.  On clearing the final show jump and sealing the win, he famously galloped his victory lap with both hands in the air and tears in his eyes.

2007 Lucinda Fredericks (Australia) on her own and Clayton Fredericks’s Headley Britannia
Several riders withdrew over concerns about hard ground but Lucinda bounced round the course on the petite Headley Britannia, the first mare to win for 55 years. Meanwhile Jeanette Brakewell’s Over To You completed his seventh Badminton.

2006 Andrew Hoy (Australia) on Susan Magnier’s Moonfleet
Off the back of a win in Kentucky the week before, Andrew led from start to finish taking the win in the first short format running of Badminton. Dream weather made for record crowds and it was a dream come true for the Australian having made his first bid for the title as far back as 1978.

2004 William Fox-Pitt on Mary Guinness’s Tamarillo
In a year blighted by the worst of the British weather, William triumphed to win his first Badminton title on the diminutive part bred Arab.

2003 Pippa Funnell on The Pitt-Lewthwaite Syndicate’s Supreme Rock
Pippa completes a remarkable back to back victory and hits a winning streak taking titles in Kentucky and Burghley to become the first winner of the prestigious Rolex Grand Slam.

2002 Pippa Funnell on The Pitt-Lewthwaite Syndicate’s Supreme Rock
Pippa wins her first Badminton title on her double European Champion partner – despite uncertain preparations having picked up an injury just a few weeks before the event. She leads the event from the front, only the second time to this point that this has been achieved.

2001 Event Cancelled due to Foot & Mouth

2000 Mary King on Hiscox Insurance Company & D King’s Star Appeal
Sailing though the show-jumping phase it was Mary who lifted the Badminton trophy for a second time, finishing the three phases with the lowest penalty score: 37.8 points. Britons swept the top placings with Leslie Law and Shear H2O in second and Rodney Powell on Flintstone taking third. At the same event, Alice Plunkett, better known as an ITV racing presenter and the wife of dual Badminton winner William Fox-Pitt, completes, the first woman to complete both the Badminton and Aintree courses.

1999 Ian Stark on Lady Hartington’s JayBee
Terrible weather can make for an exciting Badminton, as the brave riders seize their chance. In the event’s golden-jubilee year (1999), no one could match the trailblazing performance of Ian Stark on the Duchess of Devonshire’s Jaybee, the youngest horse in the field. The trophy was presented by Her Majesty the Queen.

1997 David O’Connor (USA) on Custom Made
Adding only time penalties to their dressage score, David lifted the trophy, pipping Mary King and William Fox-Pitt into second and third respectively. In doing so he remains only the second American to chalk his name on the winner’s slate. Ballycotton ridden (previously by Andrew Harris) and in 1997 by Sarah Longshaw completes his 7th Badminton.

1996 Mark Todd (New Zealand) on Robert Howell Construction’s Bertie Blunt
A tense finish at the top shuffled the final leader board and piled on the pressure for Mark to produce a clear round. Despite a couple of ‘groaners’ he and Bertie Blunt put the troubles of the previous 12 months behind them to emerge victorious.  Further down the pack, Troubleshooter and Helen Bell complete their sixth Badminton.

1995 Bruce Davidson (USA) on Mr and Mrs G. Strawbridge’s Eagle Lion
On his fifth attempt, Bruce becomes the first American to lift the Badminton title, but it was Mark Todd who rather stole the limelight, riding two-thirds of the cross-country course with only one stirrup on Bertie Blunt. We also see a rather incredible recovery from Andrew Nicholson riding Jagermeister II through the coffin.

1994 Mark Todd (New Zealand) on Horton Point Syndicate’s Horton Point
Mark lifts the Badminton trophy for a second time, remarkably with catch ride Horton Point, a horse he’d never ridden before but that came to him after his usual jockey, Lynne Bevan, broke her collarbone the weekend before Badminton. Get Smart and Karen Dixon also complete theirsixth Badminton.

1993 Ginny Leng on Citibank and Mrs H. Holgate’s Welton Houdini
The last of Ginny’s three famous wins, she led from the front to take the win by the narrowest of margins.

1992 Mary Thomson on Mrs G. Robinson and Mr. D. King’s King William
Mary Thomson (now King) wins the first Mitsubishi Motors Trophy and her first Badminton on the charismatic big bay with a white blaze who was renowned for his cross-country ability.

1991 Rodney Powell on The Irishman II
On the Irishman’s fourth attempt (and third with Rodney), the pair triumph to lift the Whitbread Championship Trophy in its final year.