Giuseppe rode in many races in Italy, then became an event rider, competing internationally, and still goes show jumping whenever he can.  As a course designer he has worked not only in Italy but in Sweden, South Africa and in Great Britain at the Windsor Three Day Event. His most prestigious course prior to Badminton was for the European Open Championships in Rome. 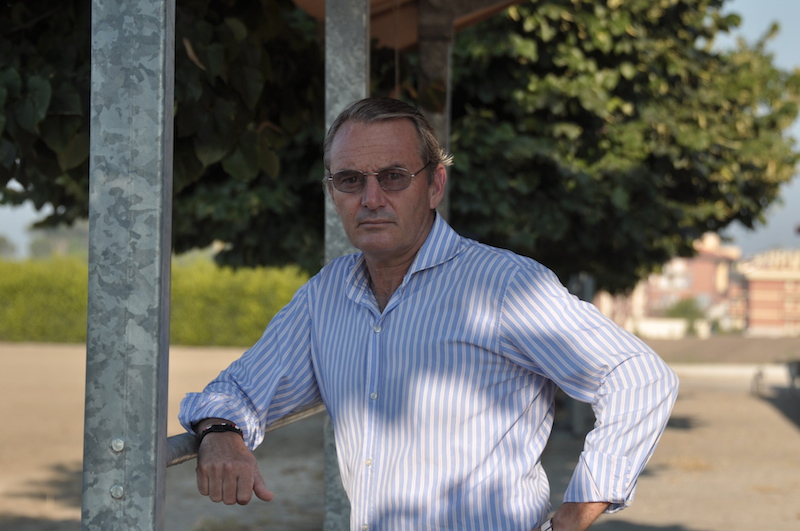 Audio Interview –  Giuseppe talks about last year and looks forward to this year:

The traditional inviting opening fence of the course.

Two rather imposing while inviting brush oxers on a slight curve are here to encourage forward riding allowing horses and riders to gently get into the course.

First complex involving some undulating ground comes quite early on course and is a good opportunity to check “all buttons work properly”. Control in speed and balance are needed to jump the downhill Cotswold dry stone wall, then accuracy in the turn to Mike Weaver’s Haycart and again balance and plenty of power up the ramp to the wall out.

“I am new here and I might have spoiled your great gallop from the Quarry to Huntsmans, but this is your opportunity to fine tune the jump for the next questions to come …”

Last year’s massive brush corners are back in this traditional location under the trees with significant change of light conditions. Much earlier on the course for this edition they are positioned a few more strides apart still requiring plenty of accuracy and scope. Slower alternatives are available for both elements mainly as a second option in case of an unsuccessful attempt to the direct route.

After Huntsmans Close and before coming to the Lake a single Kennels House in a new location will act as a “let up” fence to restore any loss of confidence and as a breather before a more intense section of the course.

First introduction to the four! water complexes on course this single hanging log in water should prove rather straightforward for this level of horses and riders, but still great attention is needed as the particular uphill approach will only give a late opportunity for the horses to actually see the lake.

The traditional Mitsubishi fence is now back in its historical position as part of the main lake complex and the beautiful Willow Waves are also back ! In front of the biggest possible crowd imaginable riders this year are asked to show all their skills of boldness, control and balance to manage the “S” bend that from the Mitsubishi pick-up will take them left over the first Willow Wave down a maximum drop in water and then right to a bounce step to a second Willow Wave. Alternative “panoramic route” is provided before all competitors will loop back to jump the final boat into water.

The giants table positioned on the exit of the garden complex just in front of the House, also if of maximum dimensions, will feel like a “let up” after the demanding lake complex.

Opposite direction, but same terrain, same challenges … The enhanced Haha is again all about unpredictability and riding more through feel than plan. A spectacular fallen tree to be jumped before the hollow will work as an introduction to the combination of narrow tree trunks positioned just on top and behind the actual mound. Three unassuming tree trunks on the flat can become a very different matter on such rising and falling ground

Curved hedges on the new contours of the Mirage pond may look very similar to last year, but coming from this side with a single hedge in water to a one stride angled combination coming out might be a very different question … There is a long alternative to the combination.

This straightforward traditional open oxer over a ditch is meant to be a let-up between the combinations at the two ponds, but I advise the ones that are planning to come back in 2016 to keep an eye to what is left up on the left

After the first year of testing for the new pond now is time to get a bit more serious. Coming from the opposite direction riders will need preparation and respect for an uncompromising birch rail on the edge of the slope into water followed by a narrow “Duck nest” in water and a final uphill birch rail on a left turn. Boldness and respect, power and balance, accuracy and straightness … this is what you test in a 4 star horse-rider combination. The long alternative asks the same questions but at a softer level.

A restoring steeple chase type fence to take in full gallop that will work as a breather after the full concentration needed for the previous combinations. Slightly downhill with a soft sloping landing should provide great shots of “flying horses”.

2 narrow roll tops and 2 deer feeders will give plenty of choice to competitors that, according to the characteristics of their horses, will have to decide how to mix and match one fence for each side of the hollow.

Back to the garden in front of the House and again the two white gates well respected by horses and riders in the past edition. They are now on a slighter tighter right turn, but should again prove no big problem if riders will show respect for them and bring back horses to the correct speed and balance.

This traditional let up fence will give another opportunity to restore any confidence lost before the final real test on course.

The greatest control and accuracy will be required to find the right line through this testing three element combination. After the first open silver birch oxer competitors will have to accept an acute angle to the second element to find their way around a tree to the final element. Plenty of slower options are available for the less experienced combinations or horses that might be starting to get tired at this point on course.

This stunning old fallen tree is a magnificent example of the most classical cross country fence that surely every kid has jumped with his pony going “across the country”.

With a slight deviation from the traditional route the course moves this year to a new location just above the warm-up area presenting a relatively “soft” test of three elements. Horses are reaching the final part of the course and the intention of the two “skinny hedges” is just to check the steering and control without asking any big effort.

This is a Badminton’s classic that this year has been completely revamped with a new beautifully shaped hedge and is there to be taken in the stride for those that don’t want to waste any of those precious seconds on the way home.

Different road crossing from last year, but similar mini test! Not a real test for this level, but for those who might have pressed a bit too much on the throttle it might reserve some surprises …