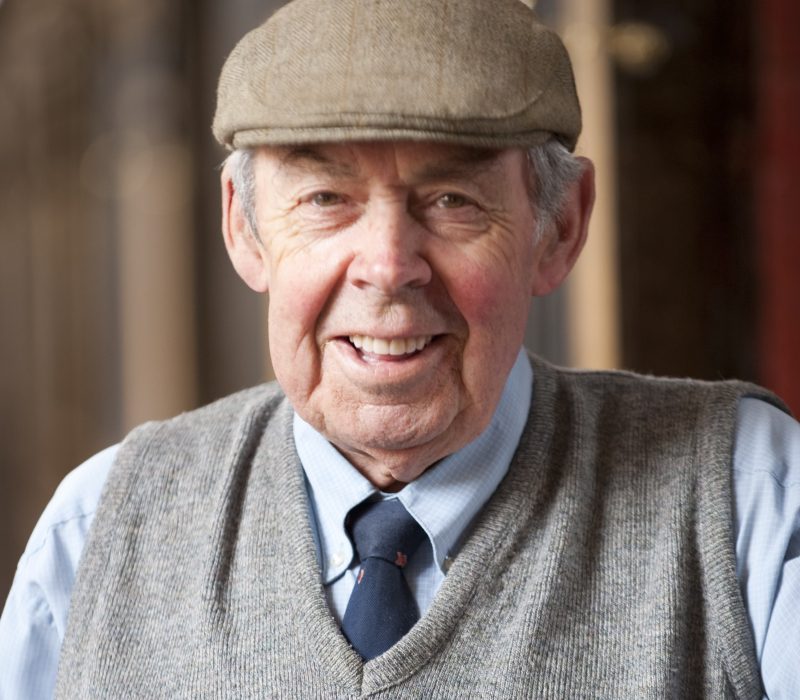 Although Brian lived in Badminton for more than 60 years, in his heart he was always a proud Yorkshireman, born in Snaiton in the Vale of Pickering.

The 10th Duke of Beaufort (Master) was judging at the Great Yorkshire Show and interviewed Brian to come to Badminton as second man in the stables.  They arrived at Badminton in 1959, which was the start of the 51 years career, working 25 years for the 10th Duke and 26 years for the 11th,  Brian worked under Major McDonald in the first instance and then Sidney Bird, whom he used to say taught him much about turnout, legs and all sorts.  He was the 2nd horseman for 7 years before succeeding Sidney as Stud Groom in 1966.

Many a good person started their careers under Brian, including the following who are still involved in Badminton in one way or another: Lin Slater, Heather Morgan, Pam Strachan, Susie Priest and last not least Margaret Hopkins who succeeded Brian as Stud Groom in 2010.  Also, Tony Barrett and Roger Boulton who have both remained good friends throughout.

Brian saw many changes in his time at Badminton, from how horses travelled to the meets, the number of horses in the stables – 50 at one time, the number of staff involved to look after the horses, but throughout he maintained the highest of standards, turning horses out for hunting 4 or more days a week.

When he was Stud Groom, his support of Badminton Horse Trials was tireless, with no stone left unturned and he headed the Stable Managers team during the week of the Event.  We never had to worry about anything associated with the stables and he would ensure that all the horses, grooms and competitors had everything they needed.  The year following his retirement, we named the second cross-country fence ‘Higham’s Brush’.  He continued as Horse Inspection Steward right up to the 2018 event.  The hundreds of tributes received via the Badminton Horse Trials Facebook page shows the high esteem in which Brian was held, many people describing him as a great gentleman and horseman.

Brian was involved in helping to encourage several members of the Royal Family when they first started riding or hunting.

Brian owned or was involved with several good horses in the National Hunt and Point to Pointing world, including Brookeside Boy and Ashley Brooke, the latter being the best.

His Show Judging career spanned over thirty years and he remained on the council of the British Sport Horse Society up to now.  His judging included several trips to Dublin Horse Show of which he was very proud.

Brian was never happier than when amongst friends and discussing horses and hunting.  Brian and his wife Sherry always offered wonderful hospitality and Brian had good stories for all those who visited their home in Shop Lane.

How lucky we all are to have known Brian, for his friendship, loyalty, wonderful humour and last but not least his amazing knowledge of the horse, which we feel so privileged to have witnessed.

Brian’s loyalty to the Beaufort family, the Beaufort Hunt and Badminton Horse Trials will be very much missed by all in Badminton.

The Duke of Beaufort added:

“Brian Higham was the stud groom at Badminton ever since my childhood, right up until his retirement. He was a unique character with an excellent sense of humour and combined this with a real knowledge of horses and their management. I’m sure that people who attended the vets inspection will recall his bowler hatted presence beside the trot up as the horses went through their examination and he will be much missed by everyone here.”

Out he came to say first “who are you?” and second “please ask if you need anything”.  Not in any way did he need to.  “Who was I?” His kind offer meant so much when I was shaking in my shoes with fear and excitement.

From that day, Brian was my favourite face to see at Badminton. Brian was a horseman of the type that no longer exists and he shared his knowledge so generously. The stables at Badminton were his joy and they were looked after like no other.

Horses and humans will never have another Brian…”

For those wishing to make a donation in Brian’s memory please donate to the British Heart Foundation or The Injured Jockeys Fund, the links are: