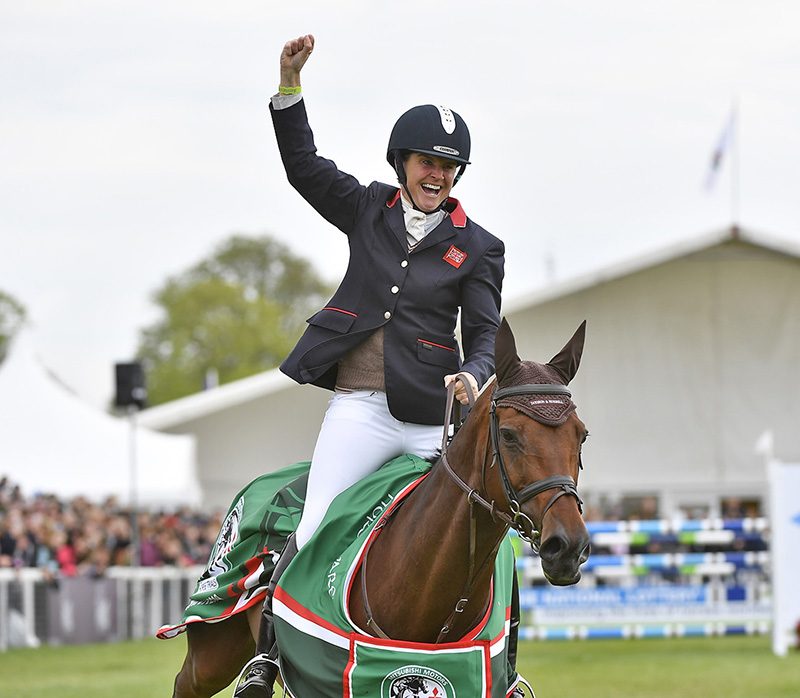 In a dramatic finale to this year’s Mitsubishi Motors Badminton Horse Trials, Piggy French wrested the sport’s most coveted title from the grasp of long-time favourite Oliver Townend in dramatic style.

In the pressure cauldron of Badminton’s main arena, Piggy, so often the bridesmaid at the highest level and lying second overnight on Vanir Kamira, jumped a superb clear aboard Trevor Dickens’ mare to turn the tables on the overnight leader when he used up his quota of lives.

Oliver, the winner in 2009 on Flint Curtis, could afford one rail down and three time penalties with Ballaghmor Class, but when a late rail fell and the clock stopped four seconds over the optimum, the 2009 winner was left shaking his head in disbelief as he realised his chances had been dashed.

This was Piggy’s 25th attempt at winning an event at the highest (five star) level and she was visibly emotional as she realised she had finally laid claim to a crown of her own.

“I’m still numb and find it hard to communicate in words what I’m feeling,” she admitted. “I’ve got so used to congratulating everyone else that I can’t quite believe it. And to be fair to Oliver – he’s very hard to get in front of.”

Asked whether she had dreamt of this moment, Piggy said: “When I woke up this morning I thought I might have a chance, but when I walked the course I thought I’d have no chance. I thought it was one of the most difficult showjumping tracks I’ve ridden and although Vanir Kamira is a real trier she’s not naturally talented in this phase. She’s better on a twisty course rather than having to deal with too many related distances.”

Oliver, who also finished sixth with Cillnabradden Evo, was gracious in defeat.

“First of all I’d like to congratulate Piggy,” he said afterwards. “It’s an unbelievable achievement, especially on a horse she wouldn’t necessarily have expected it on.”

Of his round, he added: “When he [Ballaghmor Class] hung towards the gate I had to chase him over the planks and that meant I had to strangle him a bit to the double and again to the next upright, which he had down. I ended up adding two more strides overall than I would have liked and that cost me time and, ultimately, the title.”

Australia’s Christopher Burton finished third with Joe and Kate Walls’ Cooley Lands. The gelding had been lying in fifth place going into the final phase behind his stablemate, Graf Liberty, but when the latter slid into the water tray and then clocked up two penalties, Cooley Lands hopped up the order.

“Cooley Lands is a real trier and I’ve always loved him,” said Christopher. “I’ve never had much luck at Badminton before, so I’m rather stoked with the way this week has gone. I kept telling myself in the lead-up that it was ‘just another event’, but as soon as you arrive here you realise that it really does matter as it’s the biggest event in the world.”

“He just went a bit green and showed his inexperience,” said Andrew.

Rob Lindley, Managing Director of Mitsubishi Motors in the UK, summed up the day: “Congratulations to Piggy French and her equine partner, the amazing Vanir Kamira. Witnessing them show jump in the beautiful Badminton arena is an incredible experience with the crowd willing the horse over every jump.

“Moments like these will stay in our memories for a very long time as Mitsubishi Motors in the UK sponsorship comes to an end. Thank you to the organisers, competitors and everyone who has been part of this wonderful event as we bow out of what has been a rewarding partnership, and not least wonderful, loyal customers we have met here and have made the past 28 years so rewarding for us.”