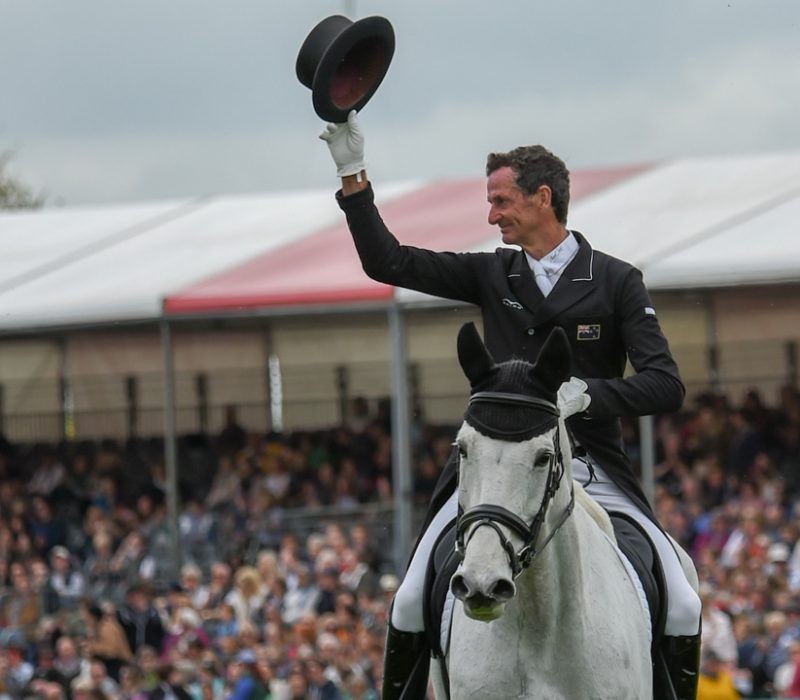 Sir Mark Todd’s career has had a long and illustrious association with Badminton Horse Trials. After he retired from eventing for the second – and final time at the end of 2019 we thought it fitting to look back on a remarkable CV with the event.

“I first read about Badminton as a child – the event has always intrigued me and when I started eventing it was a dream to maybe compete there. Badminton is the very pinnacle, it’s to eventing what Wimbledon is to tennis. There’s always been an aura about it, it’s a very magical place. The house, the park, the iconic fences are amazing and that the horses are all in the permanent stables there makes it really special.

“Every year I’d look forward to the build up; pulling up in the lorry and unloading by the [Badmimton] village hall I’d be tingling with excitement. That never waned in 40 years. To look back now and to have been lucky enough to have four winners and several others up there in the mix is very special.”

In 1980 an unheralded New Zealand farmer, Mark Todd, arrived for his first Badminton with Southern Comfort. It was of the toughest courses seen for many years. The most significant fence was a footbridge over the Vicarage ditch. It caused several falls. Only 29 of the 68 starters finished. Watch Mark at the footbridge and you will see a lucky escape. However they went clear the rest of the way and were one of only two combinations with no time penalties. (The other was future British team trainer Yogi Breisner and Ultimus, who eventually finished 3rd ). Second last to go and with a clear jumping round, Mark watched previous winning duo, Lucinda Prior- Palmer and Killaire knock one down.

Mark became the first debutante winner since Richard Walker in 1969. Listen to Mark recall the event in his own words:

A 9th place on Felix Too in 1983 was followed the next year with runner up spot to Lucinda ( Beagle Bay) on the tiny Charisma IV ( who went on to win back to back individual Olympic golds.)

After Los Angeles the pair were again runners up this time to Ginny Leng and Priceless by just one point. In 1986 he was 5th on Any Chance. As a stand in maestro Mark deputised for Rodney Powell on The Irishman and came 3rd in 1989. Rodney was to win Badminton on the horse himself two years later.

Winner on a catch ride

By 1994 Lyne Bevan, a pure Show Jumper by inclination had ridden Horton Point round the course three times, but broke her collar bone in a fall a week before the event. Mark took the ride and was drawn number 1. Lynne had never really put her foot down cross country but no one expected Mark to hang around. Mark was overnight leader and duly won.

Round Badminton with one stirrup

In 1995 Mark rode Nick Burton’s former ride Bertie Blunt, but the horse failed the final trot up. His ’95 exploits were remarkable for riding most of the daunting course with only one stirrup.

Mark lost the ride later in the year after a disagreement with one of his sponsors and the horse was put on the market. It failed to sell and two of the other owners sent it back to Mark. In third after the Saturday the two above him obliged and he posted his third Badminton win. Before his first retirement He was second on Broadcast news in 1998 and with Word for Word in ’99.

Back in New Zealand training race horses someone only half jokingly suggested he might come out of retirement for the 2008 Olympics. The joke worked and Mark was back. He decided to return to Britain and in 2011 entered NZB Land Vision for his Badminton come back.

To popular acclaim at the age of 55 he became the oldest of Badminton winners and hung up his boots for good in 2019. All at Badminton wish Mark the very happiest of retirements from the event where he first staked a claim on a most impressive Eventing career.

“I went to Burghley 2019 where it was great to be part of the presentation to Mark Todd – we were all in tears. It was particularly special for me as I can remember 40 years back when he first appeared in Britain, in 1980, and won Badminton, making it look so easy even at his first attempt.”

A gallery of Mark Todd moments from across the years