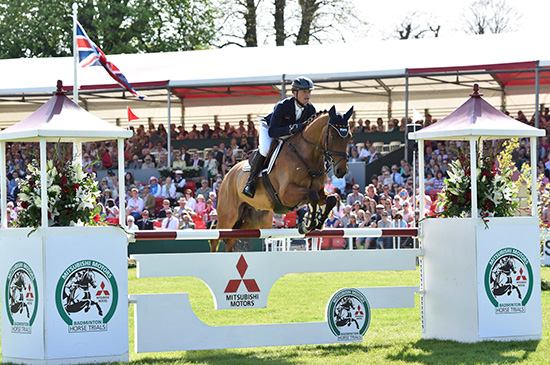 History was made at the the 25th Anniversary of the Mitsubishi Motors sponsorship at Badminton Horse Trials...

How fitting that history was made at the the 25th Anniversary of the Mitsubishi Motors sponsorship at Badminton Horse Trials.

German superstar Michael Jung (GER) and La Biosthetique-Sam FBW jumped a superb clear round in the final Show Jumping phase to not only secure the Mitsubishi Motors trophy, but also the Rolex Gram Slam – the most valuable prize in Eventing – for consecutively winning Burghley, Kentucky and now the Mitsubishi Motors Badminton Horse Trials.  His final score of 34.4 was the lowest ever finishing score recorded at the world’s greatest Three Day Event.

“I am so proud of Sam. He is not only a very special horse, but he is my friend,” said Michael, brushing away a tear as he recalled the extraordinary partnership with the 16-year-old gelding, who belongs to his family. “It will take a while for us to realise what has happened. It’s not just a win for me and the horse; it’s a win for the whole team.”

The final three to show jump this afternoon all posted clear rounds, leaving the order unchanged after Cross Country. Andreas Ostholt (GER) crossed the line and double punched the air after his clear round on So It Et, which left him second.

“I’ve been to Badminton twice before and have been unlucky [he retired on his two previous visits], so this time my aim was just for a happy finish. To still be sitting here on the final day on the stage next to Michael is more than I could have ever wished for,” Andreas smiled.

Gemma Tattersall (GBR) rode the round of her life on Arctic Soul to finished best of the Brits in third. As she entered the arena Gemma put her finger to her mouth to try and hush the crowd, but The Soul Syndicate’s ex-racehorse didn’t look like touching a pole.

“He doesn’t like loud noises; it makes him worried and that’s when he can make a mistake,” said Gemma, who won the Under-25 prize on her Mitsubishi Motors Badminton debut in 2007 when riding Jesters Quest. “Arctic Soul has been in the form of his life this year, so I knew we had a great chance, but to be in the top three is beyond my wildest dreams.”

To see who won the additional prizes, click here.