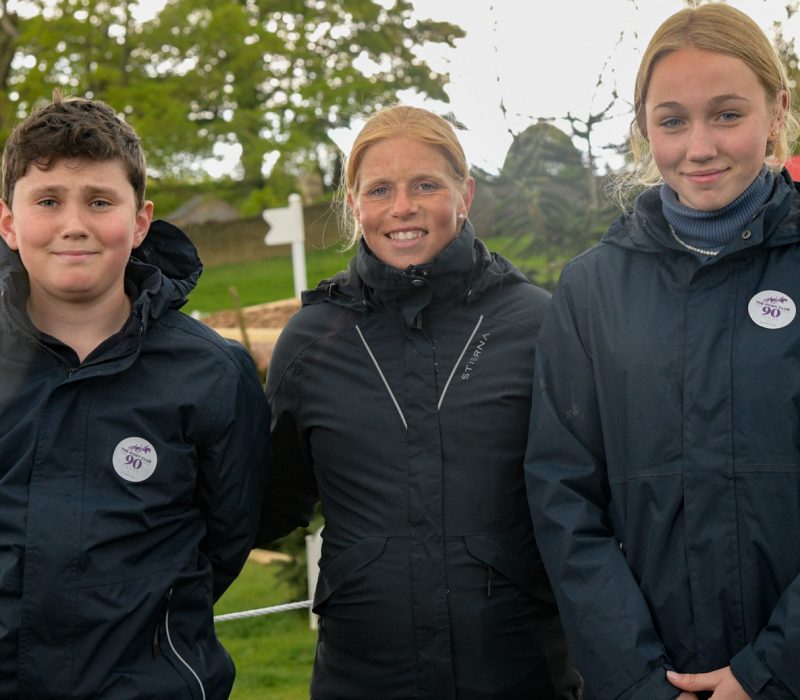 Glance down the start list of this year’s Mitsubishi Motors Badminton Horse Trials and, guaranteed, almost every one will have plied their trade in the Pony Club – which celebrates its 90th anniversary in 2019.

Every year, members of the local Beaufort branch have the chance to walk the course with a top rider and yesterday afternoon, 50 young eventing enthusiasts joined World Champion Ros Canter out on course.

“The Pony Club was a big influence in my life,” said Ros, who was a member of the South Wold Hunt North branch. “I have two older sisters who were also mad keen on ponies and so we spent our summers doing rallies and competing. It gave me a great grounding in every discipline and I have particularly fond memories of Pony Club camps held at Market Rasen racecourse.

“Some young people leave the Pony Club to concentrate on the individual disciplines, but I strongly believe they are missing out. There’s no substitute for a Pony Club education and no better place to make lifelong friends. Some of my best friends now are the ones I made in the Pony Club.”

We caught up with two Beaufort members, Ellie Watkins and Josh Barker, to find out what they learned from walking the course with the gold medallist.

Are you a regular visitor to Badminton?

Ellie: “I’ve been every year since I was a baby and this year I was lucky enough to compete in the Mitsubishi Motors Cup. I’ve never ridden anywhere with that amount of atmosphere, but it has spurred me on and I can’t wait to try and get back here next year.”

Josh: “Badminton is a special event for my family because my grandparents, Mike and Angela Tucker, both rode here and have always been heavily involved [Mike, who sadly passed away last year, was a BBC commentator for many years and Angela has officiated and trained riders].

“I have also ridden in the Shetland Pony Grand National and this year I’m a mounted runner on cross-country day, which I’m really excited about. I had to miss it last year as cross-country day clashed with a Duke of Edinburgh expedition in Wales, so I’m very pleased that I can come back this time.”

What did you learn from Ros?

Ellie: “The main piece of advice I took away was the importance of letting the horse see the fence and giving him time to understand the question. Ros also explained that you should always try to understand how the fences relate to each other.”

Josh: “Ros is a big inspiration, so it was brilliant to hear her talk about the course. The main things I learned were the importance of being accurate and sticking to your lines.”

Which fence do you think looks the most difficult?


Ellie: “I think it all looks very intense, but the first water [the Hildon Water Pond, 15ab] has a very big drop in.”

Josh: “The Outlander PHEV Bank [13ab]. The bank with the ditch looks huge and it’s hard to imagine how it will jump.”

Which rider are you most looking forward to watching?


Ellie: “Alicia Hawker because I train with her every week. She also used to belong to the Beaufort Pony Club.”

Josh: “Toshiyuki Tanaka – he’s based with my grandmother [Angela] and I’ve been lucky enough to hack out his horse, Kelecyn Pirate. Toshi is a really lovely person and rider and I can’t wait to see how they do.”

Who do you think will win?

Ellie: “Oliver Townend has a great chance. I’d also like to see Andrew Nicholson finish right up there.”

Josh: “I think Oliver, too, but I’d also like to see Tina Cook and William Fox-Pitt go well. It’s looking really good for the Brits at the moment.”